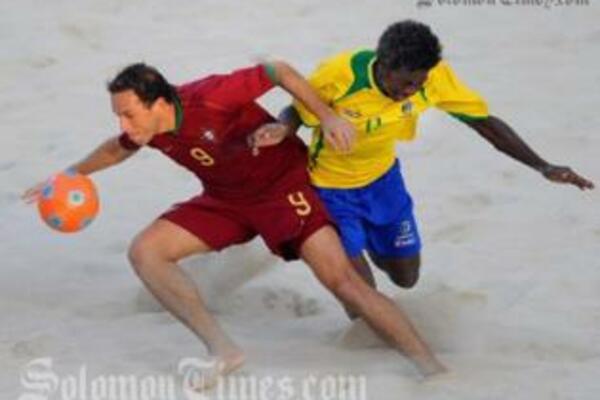 With all to play for in Group A, Portugal and Solomon Islands were ready to do battle on the beach, each having suffered disappointing group-stage losses the previous day.

Within just seconds, Portugal's Madjer had put his side ahead. Solomon Islands nearly got a goal of their own on the ensuing kick-off, but the tone was set and few bright spots followed for the Bilikiki Boys.

Belchior crushed a bullet just wide of the post, as goalkeeper and Captain Fred Hale seemed continuously involved in the action. Finally, another got through and the shots kept coming, one glancing off the post, another batted away by Hale. Solomon Islands seemed ready and willing to get back in the game, but it was beginning to look as if it would be a very long afternoon for them.

There was a bright spot for the Solomon Islands when Gibson Hosea slipped a clinical shot from distance just inside the post. But Portugal came up with unrelenting attack again and again eventually finishing the game with a convincing 6-2 win.

"We can put things together up front, but one thing we need to improve is our defending. Solomon Islands have a bright future in beach soccer. We have a lot new players that will keep making us stronger," Gibson Hosea said in the post match interview with FIFA.com.