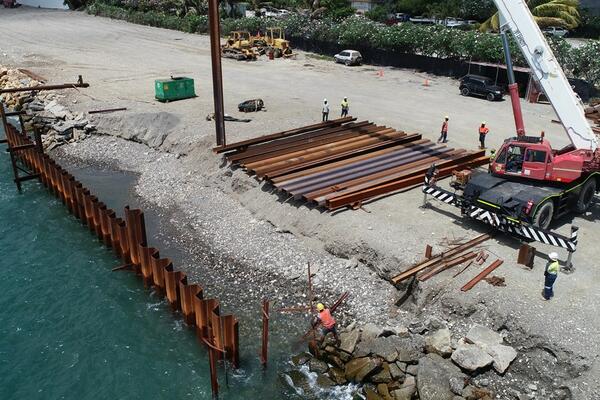 Come October 2021, users of the Domestic Port in Honiara will see an increase in entrance fee charges.

On Monday, Solomon Islands Ports Authority (SIPA) via its digital platform, circulated a notice on the increase in entrance fees to the Domestic Port.

Responding to queries from Solomon Times Online, the Authority says the reason for the increase in entrance fee is to ensure that SIPA provides a safe, efficient and up to date standard domestic port facility for all Solomon Islanders to use when traveling or trading using their facilities.

The authority says it is evident that in the past three years, the domestic terminal area has seen a lot of changes and improvements.

“SIPA has completed two standard gatehouses on the Eastern and Western domestic entries, changed and improved the road conditions, installed efficient waste collection methods which has seen our facility as one of the cleanest areas in Honiara City, continue to repair and improve old jetties, and finally, the construction of four new bigger jetties behind the Hyundai Mall, which has already commenced, and the new proposed domestic port terminal building is set to begin October 2021” a response from SIPA said.

The increase in entrance fee will see vehicle owners paying $10 - $200 depending on the type of vehicle they are driving. The entrance fee for a motorcycle will be the same to that of a taxi or hilux which is $10. The next range of fees are $50, $100 and $200.

Responding to the circular, commentators say the increase in entrance fees are unrealistic and unjustifiable.

But SIPA says it has been five years since the entrance/parking fees were first introduced and they have not had an increase since then.

The other reasons given to justify the increase includes;

• The cost of the ongoing upgrade of the domestic terminal area with the two recently opened domestic entrance and exit gatehouses that includes the buildings that house their security officers manning the domestic area, and SIPA’s revenue collection team. The the two buildings costs SBD$1.8 million.
• The cost of ensuring 24/7 security for port users, and passengers accessing the domestic jetties daily. Which costs SBD$4 million per year.
• The cost of operating a state-of-the-art CCTV Camera surveillance system. SBD$1 Million.
• LED daylight lighting system at the domestic port, which makes SIPA’s facility one of the best illuminated facilities in the country, this is to ensure domestic ship operations are done with safety and efficiency 24/7.

SIPA says as an SOE, it understands the impacts of the current Global Pandemic instilled by Covid-19.

“Which is why for the two months of March and April this year, SIPA waived all charges on our domestic wharves, which includes Free Vehicle entrance, ship pilotage fees, berthage fees, and all other fees that we charge our domestic or inter-island vessels. As a result, ships and port users using SIPA facilities for free during these two months lost SBD$8 million in revenue”.

Other developments outlined by SIPA that warranted the increase in entrance fee charges for the domestic port include a domestic terminal building which will cost SIPA SBD$80 million, passenger check-in gates erected at each wharf which is a part of the domestic terminal project. This is to help ship operators in the collection of fares and freights.