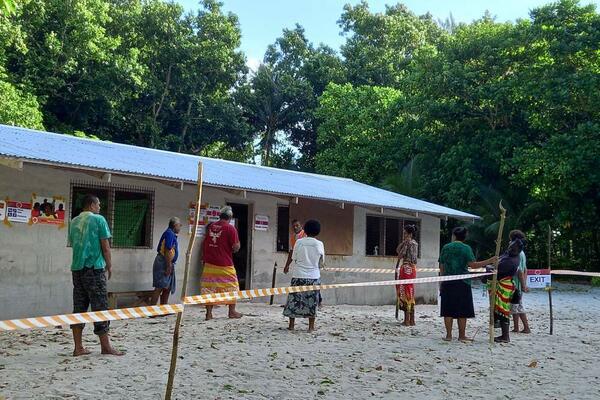 He said despite the low turnout on Anuta island, it was reportedly calm and peaceful in both islands.
Source: Supplied
By Georgina Kekea
Share
Friday, 21 May 2021 08:30 AM

Only two voters turned up to vote on Anuta island for the ward 16 provincial by-election. On Wednesday 19 May 2021, electorates in ward 16 which is Tikopia and Anuta went to the polls to vote for a new provincial member since the termination of their MPA by the provincial speaker in August last year.

Reporting from Tikopia, journalist Jeremy Gwao says at the close of polling day, it was reported that only two voters turned up to cast their vote on Anuta island.

“It might be because of the issue from the termination of their MPA by the provincial speaker”, Gwao reported.

He said despite the low turnout on Anuta island, it was reportedly calm and peaceful in both islands.

In Tikopia, Gwao said an average number of voters turned up to cast their vote on Wednesday.

“The majority of the eligible voters here on the island are old people. Most of the young population here have left the island to pursue education and employment elsewhere. Since the last voter registration, quite a few old people have already passed on”, Gwao says.

The voters list for Tikopia/Anuta recorded 1,307 registered voters, with the majority of voters in Tikopia.

The former MPA, Walter Rotopanaki, was disqualified for failing to attend three meetings of the provincial assembly. This is by virtue of the Provincial Government Act 1997, Section 15 (l)(j). His termination was announced by the Provincial Speaker, Johnson Levela in August 2020.

Meanwhile the local police have praised the people of Tikopia and Anuta for the good behavior displayed during polling day on Wednesday.

Police Commissioner, Mostyn Mangau called on the people to respect the outcome of the by-election.