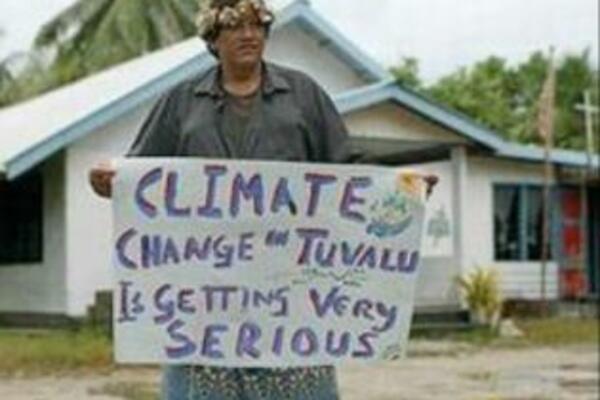 "This is about our survival", said Collin Beck of the Solomon Islands who is vice-chair of the Alliance of Small Island States which fear a creeping rise in world sea levels caused by global warming.
Source: Photo Supplied
Share
Tuesday, 15 June 2010 10:26 AM

Many developing nations insisted at UN climate talks on Wednesday that a full UN treaty should be agreed in 2010 even though others are resigned to a far longer haul to tackle global warming.

"This is about our survival", said Collin Beck of the Solomon Islands who is vice-chair of the Alliance of Small Island States which fear a creeping rise in world sea levels caused by global warming.

He told a news conference his group insisted a treaty should be agreed at the next annual meeting of environment ministers in Cancun, Mexico, from Nov. 29-Dec. 10.

Many rich nations and some major emerging countries such as China, India and Brazil at Bonn talks among senior negotiators from May 31-June 11 reckon that a legally binding deal may have to wait, perhaps until a next meeting in 2011 in South Africa.

"If we can't deliver in Cancun and we are shown the road to Cape Town or any other cities, it will be unfortunate, it will be tragic, it will be a Holocaust," said Quamrul Islam Chowdhury of Bangladesh, main negotiator for the Group of 77 poor nations.

Poor nations such as Bangladesh and Pacific island states say they are most vulnerable to climate change and that food production for millions of people will be hit by desertification, floods, heatwaves and rising seas

But many other delegates believe that a treaty is impossible in 2010 and that a more practical approach may be to focus on issues such as green technology, ensuring aid to the poor and protecting forests rather than an elusive new treaty.

But any agreements in Cancun demand unanimity. The vote of each developing nation counts for as much as those of China or the United States, the top emitters.

The U.N.'s incoming top climate official said that her focus for Cancun was for delivery on promises already made such as $30 billion in aid from 2010-12 or measures to protect forests.

"It's too simplistic to focus on 'do we have a legally binding agreement and if so by when?', said Christiana Figueres of Costa Rica, who will take over from Dutchman Yvo de Boer from July 1.

"It's not that black and white...I don't believe we will ever have a final agreement on climate, certainly not in my lifetime," said Figueres, who is aged 53. She said that advances in understanding climate science would always mean a need for adjustments.

The U.N.'s Copenhagen summit fell short of a legally binding deal in December. At the summit, most nations signed up for an accord meant to limit a rise in temperatures to below 2 degrees Celsius (3.6 Fahrenheit). But it did not spell out how.

"Ideally we could have a legally binding document in Cancun, but we in Brazil and I personally don't think it will be possible," said Sergio Serra, Brazil's climate change ambassador.

And China said the goal now was to get negotiations back on track. "The first priority for all of us is to rebuild confidence and trust," China's climate ambassador Yu Qingtai said.