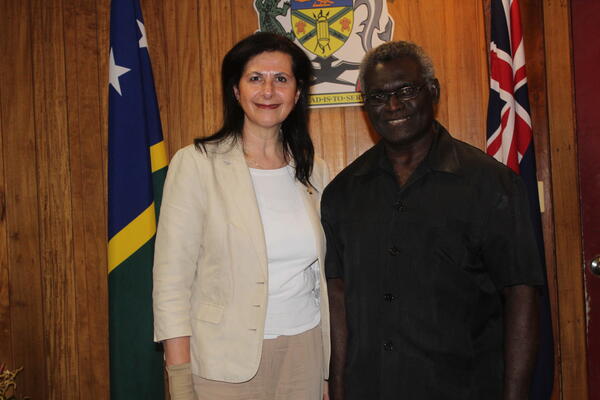 The two leaders initially discussed the new policing arrangement when they first met at the margins of the 8th Australia-Solomon Islands Business Forum in Brisbane on the 22nd of July 2016.

She said whilst the ‘nuts and bolts and language’ of the proposed treaty are still subject to discussions between relevant officials of the Solomon Islands and Australian Governments, she deemed it would be helpful for Prime Minister Sogavare to start having a look at the terms of the agreement and the sort of assistance that Australia could provide Solomon Islands under this pact.

Senator Ferriavante-Wells added that Australia’s assistance to Solomon Islands under the proposed policing arrangement would be separate to any assistance it might need to provide Solomon Islands should a ‘particular crisis or a particular disaster issue’ arise again in the future.

“There’s really two components of this post RAMSI assistance and we are obviously conscious that you have your own national economic strategy and we want to make sure that how we continue to support you is in line with your priorities.”

The Australian senator acknowledged RAMSI (Regional Assistance Mission to Solomon Islands) as a success story and the restoration of the Royal Solomon Islands Police force as one of the best police forces in the Pacific Region under the mentorship of RAMSI.

Senator Ferriavante-Wells added that one of the things that would be good for people to understand is that the success of RAMSI is largely due to its pacific regional involvement and this is a positive message.

She applauded Prime Minister Sogavare and the Solomon Islands Government for what she labeled as their tremendous support for RAMSI, adding that this strong level of support needs to be highlighted.

He said looking at the bona-fide demands of the people of Guadalcanal, they are development-related and further added that the lack of opportunities in rural areas attracted a mass migration of Solomon Islanders from other provinces to Honiara.

Prime Minister Sogavare said with the restoration of law and order by RAMSI after the years of ethnic conflict and the new policing arrangement between Solomon Islands and Australia, the Solomon Islands Government should freely go about providing an environment conducive for greater economic development.

“Yes indeed RAMSI has been a success story. The Royal Solomon Islands is now back as one of the best police forces in the Pacific region. This has also been attested to me by other Pacific Police Commissioners when they were in Honiara and that gave me great pride.”

Senator Ferriavanti-Wells also took the opportunity to inform Prime Minister Sogavare of the level of assistance that Australia would provide to Solomon Islands infrastructure and health sectors for the next four years.

As Senator Ferriavanti-Wells will be announcing the levels of these assistance during the course of her visit in Honiara, the Prime Minister’s Press Secretariat has decided not provide any details.