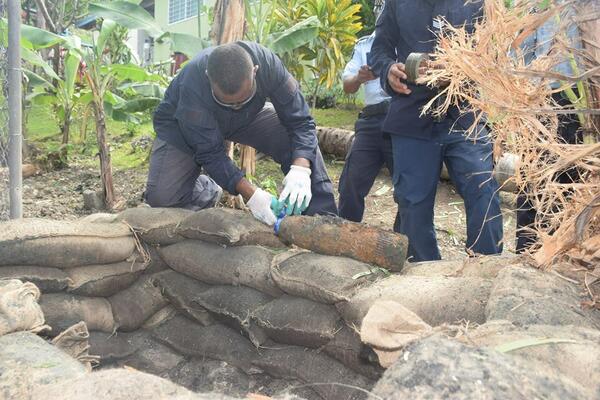 The RSIPF Explosive Ordnance Disposal (EOD) team successfully carried out the operation to render the bomb safe by defusing the projectile before safely transporting it to Hells Point in the Alligator Creek area in East of Honiara.
Source: RSIPF
Share
Monday, 17 September 2018 07:38 AM

Honiara City was on shut down on 13th September when the Royal Solomon Islands Police Force conducted a Render Safe Procedure to an unexploded bomb from World War 2.

The unexploded device was found by construction workers in Honiara City along the back road from ITA Hardware and Advanced Technology.

The operation 2018 Render Safe started in the morning when more than 100 police officers walked through the streets in the Point Cruz area to advice the public to stay clear of the area. Areas around Advanced Technology, ITA Hardware, Rock Haven Inn, United Church Rest House, and the line of shops on the western end of ITA hardware were advised to close and evacuate.

The Royal Solomon Islands Police Force (RSIPF) gave an all clear at 2.30pm after successful defusing an unexploded bomb in the center of Honiara near the Advanced Technology Building in the Point Cruz area.

“Police would like to thank members of the public in positively responding to the call made since last night for people to stay away from the area at and surrounding where the bomb was discovered. The main street of Honiara looked like a ghost town this afternoon as people took heed of the call to safely stay away,” said Commissioner of Police, Matthew Varley.

Commissioner Varley adds: “I am very humbled by the positive response of the people. They stayed off the streets and moved from their houses and offices to safer locations when the operation was underway.”

“For those whose normal lives were disrupted by the operation, I wish to apologize for that. I believe that the operation was necessary for the safety of everyone,” says Commissioner Varley.

“Furthermore I wish to thank all the RSIPF officers especially the EOD team who took part in the successful operation for a job well done. As Commissioner I have all the confidence in the professionalism shown by the EOD team and all our officers in carrying out such an operation at short notice.”

Commissioner Varley adds: “The successful outcome of the Render Safe Operation today is a clear manifestation of the capability of the RSIPF to deal with such situations for the safety of our citizens.”