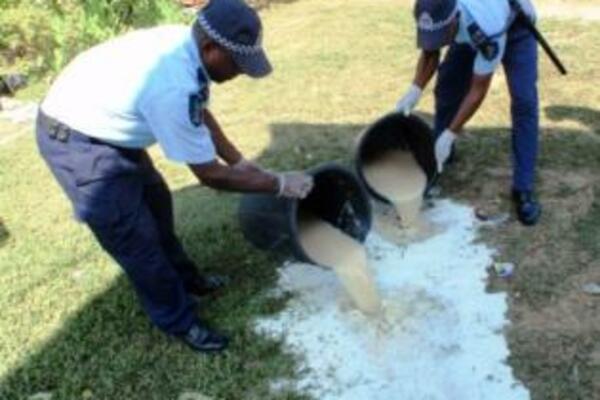 An operation by the Royal Solomon Islands Police Force Liquor Licensing Squad, supported by General Duty officers and CID detectives, struck at the heart of a black market trade of illegal made homebrew, known locally as Kwaso, at Honiara's Central Market.

More than 450 litres of kwaso was confiscated by Police yesterday - with a street value of close to SBD$15,000 of illegal alcohol seized by Police.

Suspected locations were identified and patrols were deployed simultaneously carrying out searches in 5 different locations, all with alleged links to illegal alcohol trade based at Central Market and other parts of Honiara.

Both men are remanded in custody and are likely to face various charges including Restriction on making liquor and Liquor for sale without licence.

A 27 year old woman was also arrested at a residence at Mbokona linked to the alleged mastermind of the illegal kwaso trade network. Officers from Honiara City Police and members of the Liquor Licensing Squad raided the targeted residence and caught the 27year old woman brewing kwaso.

Police said she was startled by the approaching police patrol and ran off into the bush but was chased and caught almost 100 metres from her residence. She was remanded in custody and is expected to be charged with Restriction on making liquor.

Operations Manager for Honiara City Police, Inspector Frank Fataolisia was pleased with the outcome of the operation and commended all officers involved in the operation.

"The operation starts today and will continue into the weekend it has already produced an excellent outcome for Police on day one," Inspector Fataolisia said.

"This demonstrates the RSIPF's ongoing commitment to help rid local communities of the social problems and violence caused by kwaso around Honiara and Provincial areas in recent years," he said.

"We are literally in the festive season, and the RSIPF is taking this proactive measure to reduce kwaso-related antisocial behaviour.

"This is to ensure that everyone, particularly women and children, can go about doing their day-to-day business safely."

"We are using every small piece of information from the public to actively investigate hard core criminals and move them out of the Central Market area," he said.

"Successful operations like these should serve as a strong warning to these people... You can run but you cannot hide."