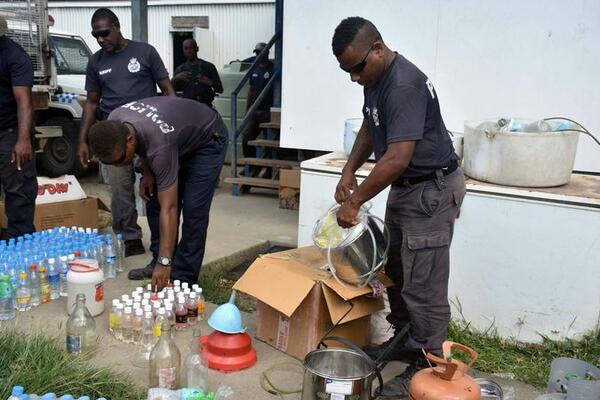 Kwaso is illegal. It affects the health of people who consume the home brew and it causes social problems including violence in families and the community at large.

The Royal Solomon Islands Police Force (RSIPF) is issuing the warning as it continues to roll out the Kwaso Action Plan throughout the provinces with stakeholders including the National and Provincial Governments, the private sector, the justice sector, the youth sector, Crime Prevention Councils, non-government organisations, councils of chiefs, civil organisations.

“Kwaso, including its production, selling and possession is illegal. It has an immediate and long term effect on the body. The consumption of kwaso can also cause a lot of social problems including violence in the family and the communities. It is also a common factor in road accidents as well as street crime and violence,” says Assistant Commissioner of Police, Joseph Manelugu, who chairs the RSIPF Kwaso Action Plan Committee.

ACP Manelugu explains: “Brewing of kwaso is illegal in Solomon Islands. If you are caught with any equipment for producing kwaso, producing it or assisting someone to produce it, selling or in possession of kwaso, you will be arrested and charged.”

“If you are arrested and found guilty by a Court for breaking the law regarding kwaso you can receive a fine up to $30,000.00 or five years imprisonment or both,” says ACP Manelugu.

He adds: “As the RSIPF’s frontline officers continue to raid and arrest people who are producing, selling and in possession of kwaso throughout the country, the Crime Prevention Department continues to conduct awareness in communities to educate our people on the effects of kwaso on your health as well as your life generally. Provincial Police Commanders (PPCs) are also implementing their provincial Kwaso Action Plans.”

“The RSIPF appeals to all members of the public to do their bit to stop kwaso affecting our population especially our youth. We know who is brewing kwaso in our villages or settlements. Report them to your chiefs and other community leaders or to the nearest police station. We cannot allow this illegal substance to affect our nation,” says ACP Manelugu.