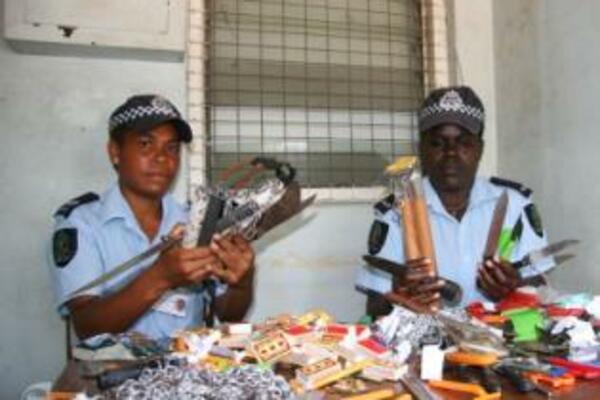 Chief Superintendent Nela Mosese said if these weapons had not been detected, they could have been used to cause great danger to players and the public.
Source: Photo Supplied
Share
Tuesday, 01 December 2009 07:32 AM

Police seized a large number of weapons during the recent Telekom Solomon Cup Soccer Tournament finals at Lawson Tama on Wednesday and Saturday.

"These were confiscated at the ground and have been recorded and stored as Police exhibits. The dangerous and illegal weapons will be destroyed."

Chief Superintendent Nela Mosese said if these weapons had not been detected, they could have been used to cause great danger to players and the public.

"Most of the football fans behave well except those few people who were under the influence of liquor and refused entry," he said.

The RSIPF arrested eight people during the soccer finals for consuming liquor in a public place, drunk and disorderly conduct, and swearing. These offenders have all been officially charged and released.

"As Forward Commander for security operations during the soccer finals, I am pleased with the safe result achieved at the weekend."

"The planning and preparations from the RSIPF and PPF was very thorough. I thank the PPF and RAMSI Military for their support of the RSIPF and SIFF," Assistant Commissioner Aoraunisaka said.

"We appreciate the cooperation of the players, teams, provincial leaders and the general public for the goodwill they have shown to safely complete this tournament.

"Hopefully this operation proves to the public that their Police Force - the RSIPF - is committed to working with communities to reduce crime and violence."