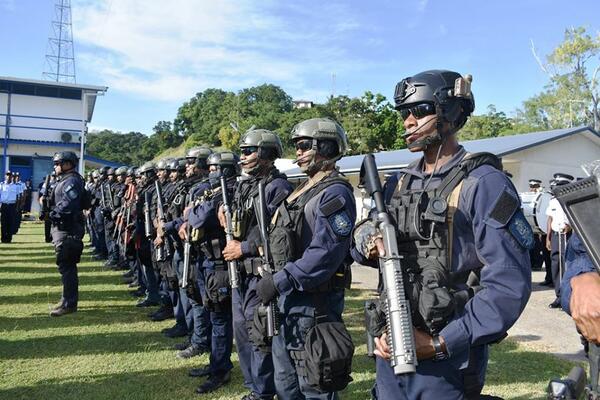 The manhunt for the three prisoners started soon after the tree escaped from the Rove Correctional Facility on Sunday 15th December 2019.
Source: Supplied
Share
Monday, 17 February 2020 10:09 AM

The Police Response Team (PRT) of the Royal Solomon Island Police Force (RSIPF) has recaptured prison escapees Frank Firimolea and Dilo Faiga at the main entry junction road to Burns Creek market between 11 and 11:45am on 15 February 2020.

Acting Commissioner Mostyn Magau says, “PRT have recaptured the two prisoners based on intelligence gathering with the provision of accurate information.”

Commissioner Mangau says, “The PRT intercepted a RAV4 vehicle and identified the two prison escapees. There were three other people inside the same vehicle who are now being questioned by police investigators.

“Three prisoners escaped from the Rove Correctional Centre in Honiata on 15 December 2019 and police recaptured one of them Willie Olo on 5 January 2020 in the Betikama LDA area."

“I would like to thank the communities for supporting the police in the recapture of the two escapees and I would also like to thank police officers who were involved in the operation to recapture these prison escapees,” says Commissioner Mangau.

The manhunt for the three prisoners started soon after the three escaped from the Rove Correctional Facility on Sunday 15th December 2019.

Initial investigations indicated the men escaped between 6pm and 9pm that day by scaling the security fence on the south side of the prison facing the botanical gardens.