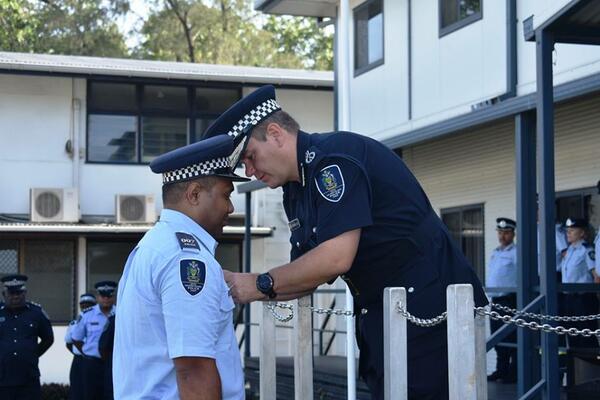 One of the local officer of the Royal Solomon Islands Police Force upon his return from Deployment in 2018.
Source: RSIPF
Share
Monday, 04 February 2019 07:48 AM

About forty officers from the Royal Solomon Islands Police Force (RSIPF) are currently undergoing training and screening at the Rove Police Headquarters in Honiara to be eligible for United Nations (UN) Peacekeeping Missions deployment.

RSIPF Deputy Commissioner (DC) for National Security and Operation Support, Juanita Matanga says, “About forty RSIPF officers across the country have been undergoing training and screening to be eligible for United Nations Peacekeeping Missions deployment this year 2019.”

She adds: “The officers undergoing this training and screening can only be eligible after passing various levels for example, vetting process of any disciplinary matters, driving test, English listening and writing, minimal physical fitness training, medical examination and maybe fire arm training and test before they can go to another level, which is the pre-deployment training. The officers will also have to undergo other training coordinated by the United Nations being finally selected for deployment.”

She explains: “The RSIPF is committed to sending officers to UN Peacekeeping Missions, but it has to ensure these officers undergo a standard training and screening process as set out in the UN deployment guidelines. All officers intending to be deployed have to pass the guidelines.”

Some of the officers in the provinces are yet to undergo the training. The training is coordinated by a taskforce comprising of Advisors from the Australian Federal Police- Solomon Islands Police Development Program (SIPDP), officers of the RSIPF Police Academy and Human Resources Department.