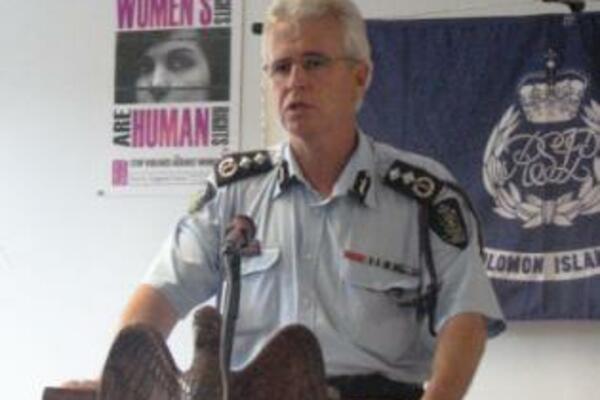 Police Commissioner Peter Marshall urge all interested parties to allow the Police to do their work and not get involved in any misguided attempts at retribution.
Source: STO Archives
Share
Thursday, 21 May 2009 09:32 AM

"A large group of young men were reported to have been throwing rocks at two houses and threatened the occupants and family members there," he said.

"These men claimed to be relatives of the deceased and were retaliating against a man they believed was partly responsible for the stabbing death of Billy Toito'ona.

"A major Police operation was initiated in response but the situation soon calmed down and overnight mobile units maintained observation of Kaibia Heights."

Mr Marshall said the National CID investigation was today being supported by community policing and ongoing patrols in the Kaibia Heights area.

"Senior Police and Community Relations Officers are working closely with respected North Malaitan Chiefs, Honourable MPs and church leaders to establish a meeting with Billy's uncle and assist in negotiations between the families involved," he said.

"I urge all interested parties to allow the Police to do their work and not get involved in any misguided attempts at retribution. Justice is better served through the courts."

Meanwhile, the RSIPF is still actively investigating the involvement of other persons in the stabbing death of Billy Toito'ona after a drunken fight early Saturday morning.

Police have invited two men believed to be key witnesses to the incident to assist them with their enquiries. This follows the arrest of a 20 year old Olifei Fils who was charged with murder on Saturday. He has now been remanded in custody awaiting trial for murder.