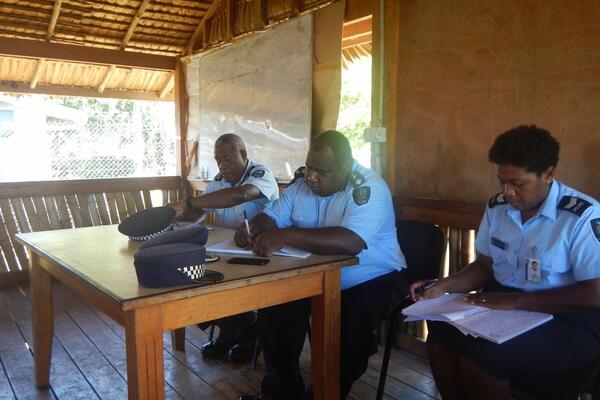 AC Manelugu says, “One of the key issues we discussed during the meeting is land for police infrastructure projects. The PS assured me that the Western Provincial Government has allocated a piece of land for police but it only needs some administrative paper work before it is acquired.”

“The allocation of a bigger plot of land could be used to build more housing for police officers and other police infrastructure projects. Western Province is a big province and it needs more manpower but before addressing that we have to look into housing for officers.”

ACP Manelugu explains, “The proposed piece of land is crown land so it will be much easier to acquire than if it was customary land. During the meeting with the PS, we also discussed an upgrade of the Noro and Munda police stations. These two towns host an international airport and an international seaport so policing must be boosted to cater for the population and ongoing developments.”

As part of the provincial tour by AC Manelugu the officers from Munda, Noro and Gizo mounted a parade at the Gizo Police Station to welcome the delegation from Honiara. After the parade a muster was conducted to update and discuss with officers some discipline and leadership issues faced by officers.

The team from Honiara also shared with the officers during the muster information on Coast Watchers program and the drivers of crime, which is alcohol and environmental issues including the impacts of logging.