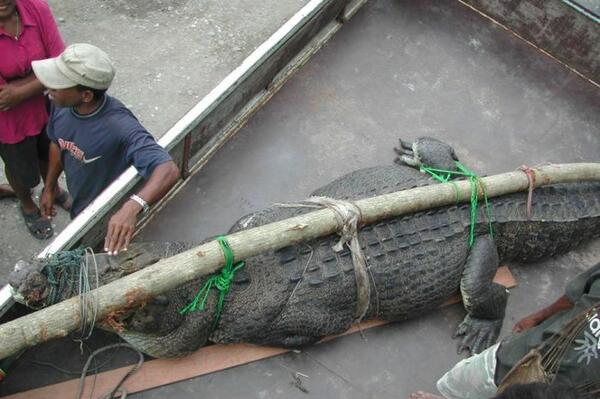 A three-day operation by officers of the Royal Solomon Islands Police Force (RSIPF) Police Response Team (PRT) has killed four crocodiles in and around the Koqu Deo Settlement including Kaza Village on Kolombangara Island in the Western Province from 5 – 7 June 2019.

The operation was in response to a request from the concerned communities on Kolombangara after a male person was attacked and killed by a crocodile while diving in a river at Kaza Village on 2 June 2019.

“The four crocodiles confirmed dead included the one suspected to have killed the deceased man. It measured more than 11 feet. It was killed at the river mouth at Hapi Village. When the reptile was cut up, members of the communities there discovered human body parts believed to be those of the deceased from Kaza Village,” says Superintendent Rex Waiwori, Supervising Director of the National Response Department (NRD).

Superintendent Waiwori adds: “I would like to thank members of the communities on Kolombangara where the operation was carried out for their cooperation as well as the Provincial Police Commander Western Province for the assistance rendered to the PRT team.”

“It’s great to know that the family members of the deceased who died as a result of the crocodile attack at Kaza Village on 2 June were fully satisfied and appreciated the action by RSIPF which resulted in the killing of the crocodile and recovery of parts of the body of their relative,” says Superintendent Waiwori.

RSIPF urges members of the public throughout Solomon Islands to report any sightings of crocodiles in their communities as soon as you can to the nearest police station or to the Police National Communication Centre on phone 23666 or toll free 999.