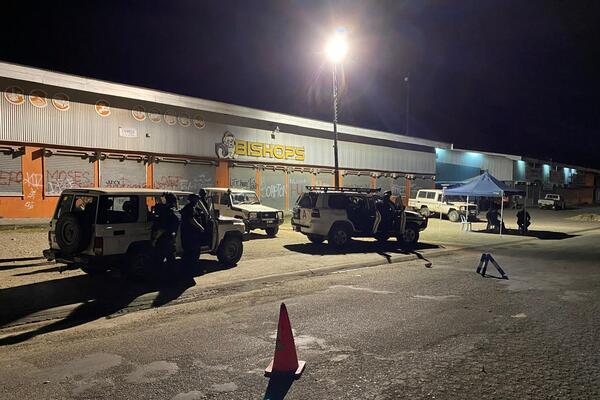 Despite the return of normalcy to Honiara, police and the visiting peacekeeping force are keeping a close watch on movements in and out of the city.
Source: Supplied
Share
Tuesday, 14 December 2021 10:52 AM

The Commissioner of Police Mostyn Mangau says there is an active investigation into alleged threats of a “second wave attack” on the capital Honiara.

The Police Commissioner was responding to reports in the media that there is a group planning an armed attack on the capital after the motion of no confidence against Prime Minister Manasseh Sogavare was defeated.

Police Commissioner Mostyn Mangau said that the threat is being treated as a matter of national security.

"Police will not tolerate any armed groups or criminals who are taking the opportunity to plan their crimes to threaten the sovereignty of this nation,” Mr Mangau said.

He appeals to members of the public to not participate in fear-mongering to avoid spreading misinformation.

"Such a plan will only affect the lives of our people and essential services in our country. I am urging communities to come forward with information and evidence of any suspicious activities or movement in the communities of such illegal activities," Mostyn Mangau said.

The commissioner said there are legal avenues available for people to voice their concerns on matters affecting their lives other than planning to commit crimes.

"We do not want to go back to our dark moments where lawlessness had crippled our beloved country, Solomon Islands.

"I call on the National leaders, community leaders and church leaders to work together with the police to make sure our communities are safe and peaceful," Mostyn Mangau said.

With RSIPF Media and RNZ