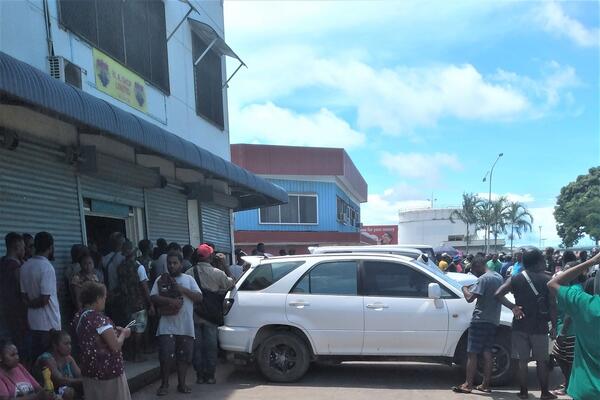 Curious onlookers yesterday outside the shop where the body of the Chinese shop owner was discovered.
Source: STO
Share
Wednesday, 14 April 2021 10:45 AM

An initial report say that the deceased left her house in the Ranadi area, east Honiara to drop off her twin sons at school in the morning and then went down to her shop inside the White Angel Building in Point Cruz to open it as normal.

While the shopkeepers were waiting outside for the deceased to open the shop, the husband of the deceased arrived and sought assistance from a nearby shop to open their shop as the doors were locked from inside. When the husband finally entered their shop just before 9 am, he discovered his wife (deceased) lying on the floor with blood all over her body.

Assistant Commissioner for Crime and Intelligence Patricia Leta says, “The matter was reported to police and officers form the Forensic Unit, National Criminal Investigation Department (NCID), Fire and Rescue, Police Response Team (PRT) and Central Response Unit (CRU) attended the incident and cordoned off the scene of the crime while investigations begun.”

AC Leta says, “The body of the deceased is now at the National Referral Hospital (NRH) morgue for further examination and postmortem.”

“Our sincere condolences to the family and relatives of the deceased for the loss of their loved one.”

AC Leta adds, “So far no suspect has been identified as the investigation continues. I call on members of the general public who may have been around the White Angel building in Point Cruz that morning and may have noticed anything suspicious to come forward to police with any information that may assist the investigation into this very sad incident in our capital city.”

Anyone with any information should call NCID on phone 21192 or the National Police Communication Centre on 23666.