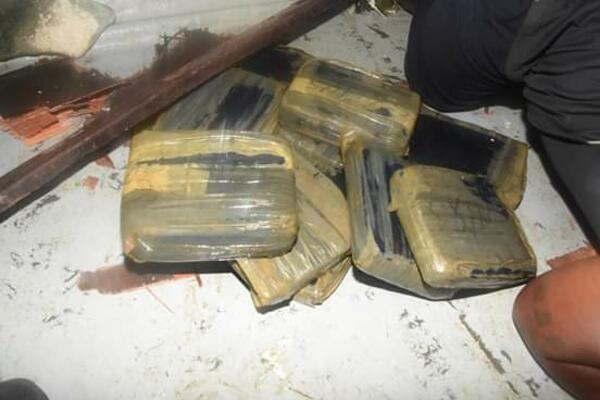 A team of investigators from the Royal Solomon Islands Police Force (RSIPF) have travelled to Ulawa Island in the Makira Ulawa Province this week following discovery of alleged drugs in a boat.

Assistant Commissioner (AC) for Crime and Intelligence Ian Vaevaso says, “A wooden dinghy was found washed ashore on Ulawa Island on 30 October 2019. There were packages resembling illegal drugs inside the dinghy.”

AC Vaevaso says, “Police at the Taheramo Police Post responded and attended the scene and examined the packages. They discovered a number of A4 size plastic bags containing green plant matter. The packages were well and professionally stacked/stored inside the dinghy.”

“With the support of a team of police officers from Honiara a total of about 415 packages including 4 lose packed substance and bottles were removed from the dinghy by police. Observations made on the dinghy indicate that this boat may have been floating/drifting at the sea for a while as sea weeds and mussels have grown around the boat.”

“Police conducted a Presumptive Forensics Test which indicated the substance may be Cannabis (marijuana). However further scientific tests and analysis will need to be conducted by RSIPF Forensics when the drugs get to Honiara,” says AC Vaevaso.

There has been no suspicious boats or yachts seen sailing around Ulawa Island during the discovery. It is alleged the dingy may have drifted to the Island.

The RSIPF is now working with its regional security and intelligence partners to identify if there is any criminal or organised transnational criminal syndicate involved in this transhipment and trafficking through our borders. Police is also going to investigate whether the drugs are from within Solomon Islands.

A Police Patrol Boat has been deployed to Ulawa to transport the drugs back to Honiara.

Any member of the community who has any information about this incident, or has seen the boat before, should contact your local police or the RSIPF in Honiara.