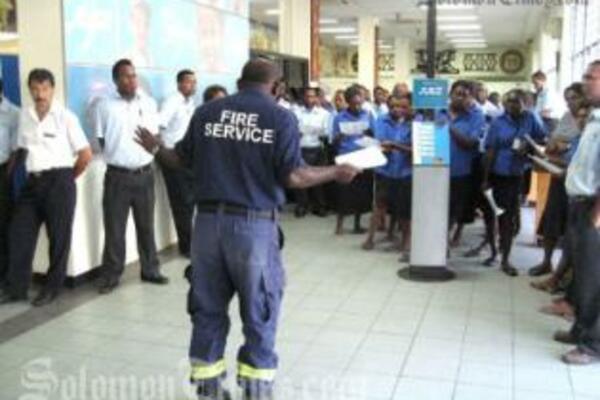 The fire safety knowledge of bank staff from the ANZ Bank's Point Cruz branch was put to the test early this morning when the Police Fire Service initiated a fire evacuation drill at 8.30am.

"Their response was very timely, a good training and practise for a real situation, particularly for the fire wardens looking out for fellow staff members," he said.

"In real situations, things can turn out differently but the risk of panic and casualties are greatly reduced by people understanding what to do, where to run and how to put fires out quickly."

The evacuation exercise resulted from a request to the RSIPF Fire Service by the ANZ Bank as part of its emergency protocols covering natural disasters and fire situations.

Head of Retail Banking for ANZ Solomon Islands Mr Aubrey Dodd said the fire safety education program helped the bank to fulfil its duty of care to its employees as well as bank customers.

Inspector Kuma thanked the ANZ Bank staff for their participation in the learning exercises over the past two days, saying the experience helped build a stronger partnership between fire fighters and the Honiara business community.

"This training has equipped the fire wardens and other bank staff to react quickly to various causes of fires, so they are more confident using fire extinguishers and evacuation procedures," he said.

"RSIPF Traffic officers also responded quickly to assist in the smooth flow of the traffic, when the drill was running into its peak and moving people out into the street," he said.