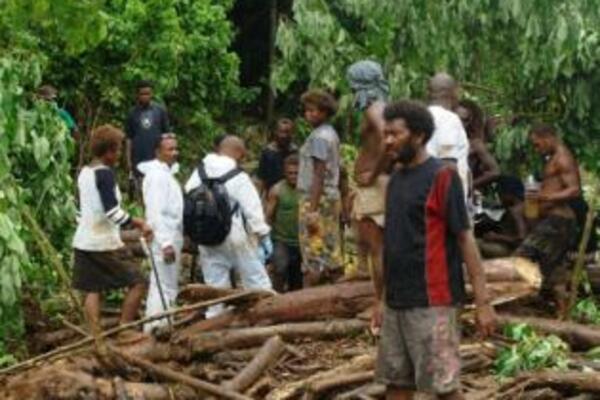 The body of the young boy was found covered in debris further down the river by locals.
Source: Photo Supplied
Share
Monday, 25 January 2010 09:57 AM

The body of the missing two year old boy, washed away by flooded waters last week, was located by locals over the weekend.

The Royal Solomon Islands Police Force Forensic Team attended the scene and examined the circumstances around the boy's death before the body was removed and taken to the morgue.

Police continued their search over the weekend in the flooded areas of Sun Valley, near Lunga Rive, and at approximately 11 am the body of the young boy was found covered in debris further down the river.

"It is sad news that we must inform the family and community of the death of this child," said Deputy Commissioner Edmond Sikua.

"The RSIPF officers continue to search for the other missing child in the New Zealand Camp area, but the conditions are quite challenging as the ground and surrounding area is unstable," he said.

Police are asking that people take care when returning to areas affected by floods as some of these locations are still quite dangerous.

"We want people to avoid going close to waterways and areas where floodwaters may have loosened the ground," said Deputy Commissioner Sikua.

"We have police patrolling around the area most damaged by the floods and they will be asking people to keep away," he said.

Police have been conducting a number of patrols through Burns Creek, White River and flood affected areas of Honiara. They will continue to assess the situation and ensure that the community is kept notified of policing efforts in the area.

Police Headquarters are also remaining in contact with a number of provincial areas who were affected by the floods, but have since reported good weather and receding water levels.

Overnight the Police Club gave refuge to in excess of 130 people who were supplied with bedding and food and taken care of by Red Cross and RAMSI. The majority of those people have now returned to their villages with only a few remaining at the Police Club for support.