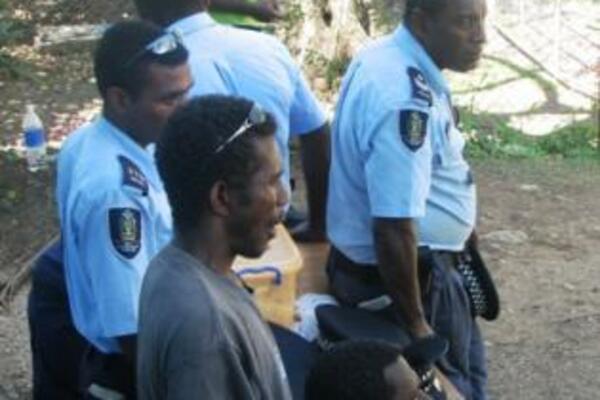 Stop throwing rocks or stones at vehicles or "you will face the full force of the law."
Source: Joy Basi
Share
Wednesday, 22 April 2009 09:37 AM

The Royal Solomon Islands Police Force is issuing a firm warning to individuals, stop throwing rocks or stones at vehicles or "you will face the full force of the law."

"People found throwing rocks will be caught and dealt with harshly by Police and the courts," he said. "They will be charged with a new felony offence - Acts intent on causing grievous harm."

Mr Kola said that rock throwing incidents were usually the result of drunken and aggressive behaviour and would not be tolerated by the Royal Solomon Islands Police or the community.

"Rock-throwing is a criminal activity which can cause serious injury directly to people, criminal damage to vehicles and risk drivers losing control and crashing into innocent bystanders," he said.

"Enough is enough. A series of incidents around Honiara in recent times including at Kola Ridge, and the stoning of the Prime Minister's security convoy at Tasiboko over Easter, highlight the potential dangers of throwing rocks at vehicles.

"Reported incidents in the past three months have involved official and police vehicles as well as private cars driven by Solomon Islanders and expatriates simply going about their business," he said.

Mr Kola said such actions were abhorrent because they have the potential to kill and injure innocent bystanders and pedestrians in the vicinity of drivers under attack.
"People intent on this kind of dangerous behaviour and intimidation tactics on local roads are warned to think twice before they throw rocks or stones. It will not end well for them," he said.

"A felony offence is a serious power the Royal Solomon Islands Police is instructed to enforce at an operational level in rock-throwing incidents attended by general duties officers. People should heed this warning and help prevent this kind of dangerous behaviour at once."

Anyone who witness rock-throwing is urged to call Police on 999 immediately.