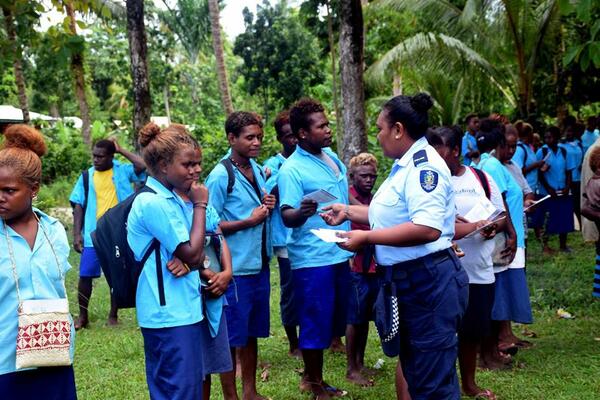 Local RSIPF officer shares the NGE pamphlets with students who attended one of the awareness programs.
Source: RSIPF
Share
Wednesday, 20 March 2019 07:20 AM

The Maoa and Bina Harbour communities in West Kwaio, Malaita Province have assured the Royal Solomon Islands Police Force (RSIPF) that they will work together with police during the upcoming National General Election (NGE) to prevent crime in their communities.

The assurance was given to a team from the RSIPF consisting of officers from Honiara and Auki who were conducting NGE awareness in the communities today (19 March 2019).

A former Malaita Provincial Assembly member and a leader in the Maoa community assured the RSIPF team that nothing will happen during the General Election and communities in and around Bina Harbour voiced the same sentiments.

Director of RSIPF’s Professional Standard and Internal Investigation (PSII) Superintendent Solomon Sisimia who is leading the Team says, “As we approach the NGE, there is a need for us to understand the role of the police, the responsibilities of registered voters, election offences and penalties. This is very important.”

Superintendent Sisimia told the communities that the responsibilities of the registered voters and members of the public include:

“The penalties for the offences under the new Electoral Act are very severe like the offence inside the Act on supplying misleading information or document. This offence attracts a fine of $50,000 or imprisonment for five years or both if found guilty,” Superintendent Sisimia explains.

Members of the public at the communities visited in West Kwaio were allowed to ask questions and the RSIPF team was able to ask them during the awareness program.