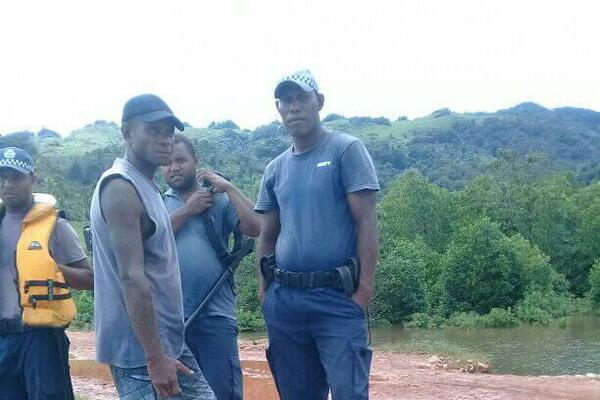 Officers at Atori and community member display some of seized cartons of alcohol
Source: RSIPF Media
Share
Thursday, 12 December 2019 07:23 AM

Officers of the Royal Solomon Islands Police Force (RSIPF) at the Atori Police Station in East Malaita have confiscated a number of cartons of alcohol from three homes in surrounding communities.

Officer-in-Charge of Atori Police Station, Staff Sergeant Robert Kwaeria explains: “Police in the southern and eastern regions of Malaita Province have started an operation code named “Atomakato” to ensure illegal alcohol is not sold in the communities of both regions.”

“A total of nine cartons of alcohol have been seized by police from three the homes on 10 December 2019. According to our intelligence, these seized alcohol were from people who illegally sell alcohol without liquor licenses. The people who owned the alcohol were not able to produce any license to sell alcohol, for that reason the alcohol will be detained by police awaiting advice from the Malaita Provincial Government Liquor Board,” adds Staff Sergeant Kwaeria.

“Police did not make any arrests but the people owning the cartons of alcohol have been given 14 days to produce a liquor licence to sell the alcohol. Failing to produce such license then police will seek advice from the Magistrates Court on how to dispose of the alcohol.”

Police at Atori will continue with its operation in the lead up to the Christmas and New Year 2020 festivities. Last week the operation confiscated more than 100 cartons of assorted alcohol from a landing craft on its way to the southern and eastern regions of Malaita Province. All the alcohol have been confiscated by police at the Atori Police Station awaiting the production of valid liquor licences.

Police call on people in the communities of the southern and eastern regions of Malaita Province to cooperate with the police to cease such illegal activities such as selling alcohol without a licence so people can celebrate the coming festive season in a peaceful and crime free manner.