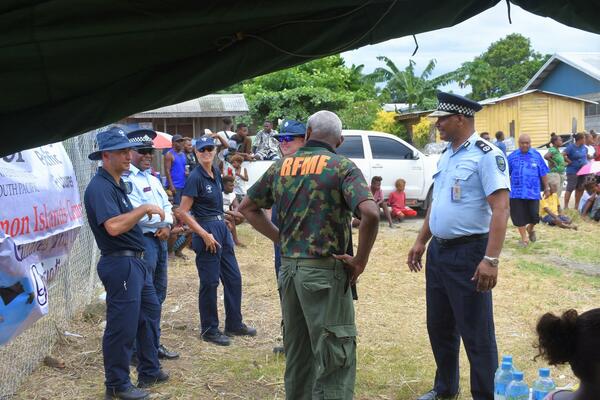 Commissioner of the Royal Solomon Island Police Force (RSIPF) Mr Mostyn Mangau visited Burns Creek community yesterday during a game that was conducted as part of community engagement with the communities during this festive season.

Mr Mangau says, “The game has been organized by the Republic of Fiji Military Force (RFMF) to engage communities around Burns Creek area to engage them to avoid any unwanted activities during this festive season.”

He says, “The engagement program which was organized by RMFM is the support rendered to RSIPF under Solomon International Assistance Force (SIAF) after the recent social unrest happened in Honiara.”

“I am happy to see our young men and women at Burn Creek are participating in such activities.

“They are full of potential sporting skills which I believe if we nurse them properly, they will become someone and will raise our flag in future activities,” says Commissioner Mangau.

As part of the visit, Mr. Mangau also visited Guadalcanal Police at Henderson Police Station to give them moral support and encourage them to execute their duties.