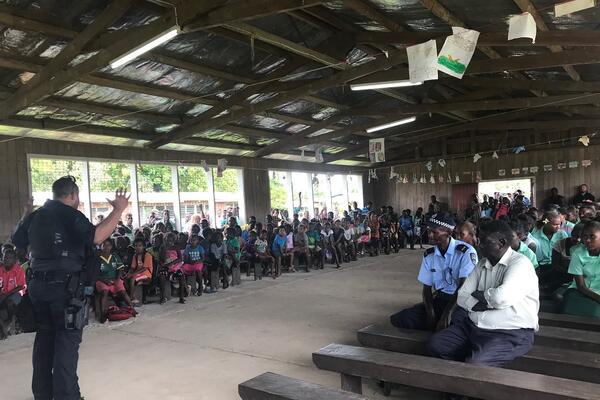 The Royal Solomon Islands Police Force (RSIPF) commends members of the public for their great behavior shown during the National General Election (NGE) including during the counting of ballots and the declaration of the results which ended on 7 April 2019.

“I would like to thank members of the public all throughout the country for the great behaviour shown after the remaining winning candidates’ results in the NGE were declared on 7 April 2019,” says Commissioner Matthew Varley.

He adds: “I would also like to commend the hard work of RSIPF, Correctional Service Solomon Islands officers, involved in the NGE for maintaining law and order especially during the counting of ballot papers.”

“I would also like to acknowledge the officials of the Solomon Islands Electoral Commission (SIEC) who had done an important part to address issues arising during the polling and counting periods. At the same time, I acknowledge the help provided by the Combined Task Group (CTG) Australian and New Zealand Defence Forces, (SIPDP) Solomon Islands Police Development Program, (SIPSP) Solomon Islands Police Support Program, food caterers, local logistical support providers and our finance officers that enabled the smooth running of the RSIPF NGE Operation,” says Commissioner Varley.

“We now have 50 newly-elected Members of 11th Parliament who will soon be coming together to elect a new Prime Minister and Government. I once again appeal to all members of the public especially those in Honiara and of cause the rest of the country to respect each other and do not provoke and criticise one another in any way that will lead to any violence. We must continue to work together to ensure a new Government is formed during the time that has been allocated,” Commissioner Varley emphasises.

He adds: “I appeal to everyone for the peace that existed during the polling to continue into the period for the election of a new Prime Minister and new Government.”

The RSIPF NGE Operation is continuing to monitor and assess the security of the country as the process of the election of a new Prime Minister and new Government. Police also cautions members of the public that it will take strong action against anyone who tries to organise any float parade or take part in any activity that will lead to violence.

Police officers will be out on the roads to conduct random breath testing (RBT) and traffic checks to ensure the roads are safe for everyone. Officers will also be checking on vehicle and drivers’ licenses. Police will take action against any overloading of vehicles. And always remember - do not drink and drive. Your safety is your responsibility and responsibility of every concerned member of the public.