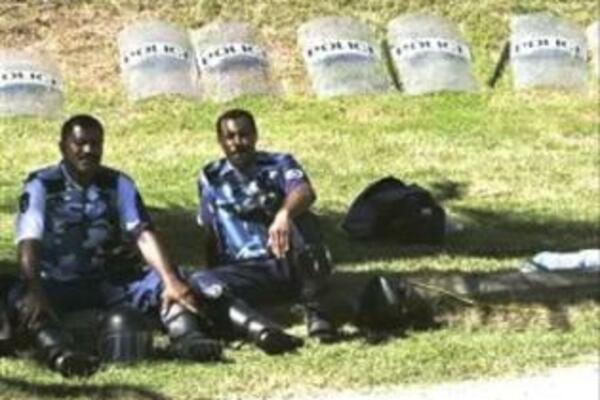 The RSIPF is the lead agency in this joint operation and will be closely supported by the RAMSI Participating Police Force and Military personnel.
Source: Photo Supplied
Share
Tuesday, 24 August 2010 08:54 AM

As the election of the country's Prime Minister nears, and with memories of the 2006 Prime Ministerial election still fresh, police have taken extra measures to beef up their presence in and around Honiara.

The Royal Solomon Islands Police Force (RSIPF) will soon commence the next phase of the ongoing security operation in preparation for the election of the Prime Minister which is expected to be held soon.

Police Commissioner Peter Marshall has the overall responsibility for the response of the RSIPF and supporting groups and Deputy Commissioner Sikua will be reporting directly to him.

The RSIPF is the lead agency in this joint operation and will be closely supported by the RAMSI Participating Police Force and Military personnel.

Additional officers conscripted under the operation will continue to support general duty officers. They have been jointly rostered to cover each 24 hour period with a large number of officers currently carrying out High Visibility patrols in Honiara and surrounding areas.

Although police are not anticipating any trouble, preparations are in place to ensure that the election for a new Prime Minister will be carried out safely and peacefully without any disruption.

The security operation maintains the secured locations in the city and officers will continue to work from these strategic sites to effectively respond to any incident that may occur.

Police have consulted with the Speaker of National Parliament and it has been determined that the Parliament Grounds will not be open to members of the public during the election and announcement of a new Prime Minister.

Access to the parliament compound will be restricted to Parliament Members and those working in the Parliament House.

Media representatives will also be given access to the parliament compound to cover the event which will allow the whole nation to hear the announcement of the result which will be broadcasted live.

One Television company has also dedicated new facilities to enable live television coverage of the event.

This is the first time ever that such event will be broadcasted live on television and it would be a unique opportunity for television viewers to be able to watch the event live from their homes in Honiara and in some of the provinces.

The Prime Minister's Election Day will be a public holiday and it is advisable that people stay home and listen to their radio. Those who have access to a television are also advised to tune to One Television as the result will be broadcasted live through their channel.