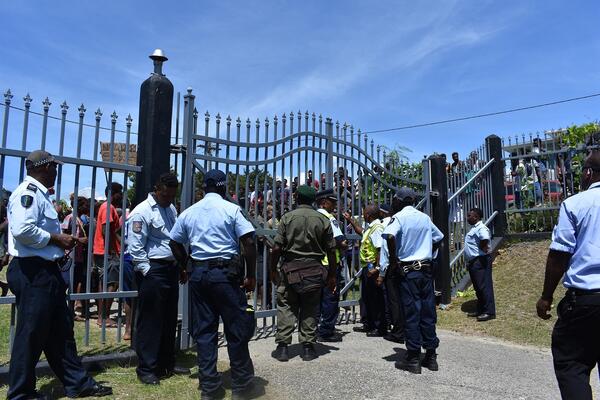 The Royal Solomon Islands Police Force (RSIPF) has so far arrested more than 30 suspects for offences involved in disturbances in Honiara after the election of the Prime Minister on yesterday morning.

Police allege certain members of the public decided to take the law into their own hands and marched through some streets in the capital Honiara causing public disturbances, fighting and property damage. Significant damage occurred at the Pacific Casino Hotel and numerous vehicles were also damaged.

These crowd marches were illegal, and Police are currently investigating with the view to arresting further suspects.

Five RSIPF and four Correctional Services officers were injured and needed medical attention during the disturbances.

Commissioner Matthew Varley says, “To stop any further illegal gatherings in our capital city, the RSIPF calls on all goods citizens of our capital city to stay home tonight (24 April) and do not come out unless it is extremely necessary.”

He adds: “I have ordered a large police operation to conduct more high visibility patrols across Honiara tonight and police will stop anyone that is causing trouble around the city. People engaged in disorderly conduct will be searched and dealt with. I have also ordered a number of road blocks and checkpoints to be put in place to reduce traffic in the city.”

Commissioner Varley explains: “This is necessary to ensure we maintain security across Honiara tonight. The RSIPF will not take any chances when it comes to public safety.”

“If you are a law-abiding citizen, then you have nothing to fear. Police are in control and we are continuing to respond to any incidents of disturbance around the city. But anyone who is planning to carry out any illegal activity can expect police to deal with you sternly.”

“I urge all law abiding citizens to stay at home tonight and stay off the streets. Please stay home with your families tonight and allow the police to maintain law and order in our capital city,” Commissioner Varley emphasizes.

“Once again,” Commissioner Varley says, “Let us accept the outcome of the election of the Prime Minister and allow National Parliament and the Courts to deal with any issues that have arisen during the election process.