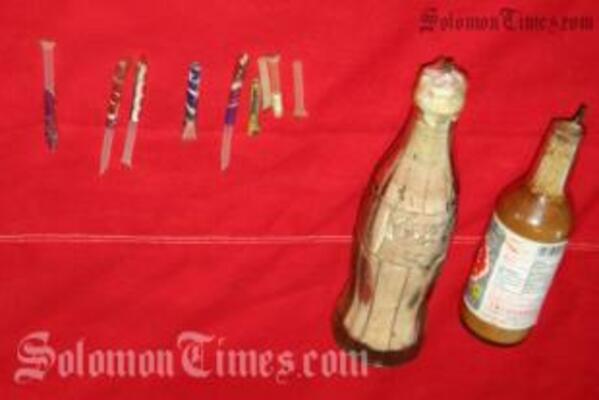 The explosives are believed to have been extracted from World War II ordnance.

They face charges under both the Fisheries Act 1998 and Explosives Act including using explosives for the purpose of fishing and extraction and possession of explosives.

Penalties for illegal fishing range from fines of $1000, while the Explosives Act offences can result in a conviction and fine of $200, 6 months imprisonment or both.

Inspector Jack Balaga of Honiara CID said the pair were surprised by police officers from the Explosive Ordnance Devices (EOD) unit in the Alligator Creek area at 6.30am.

PPF advisor Dennis Sweeney said two men were observed behaving suspiciously after landing their banana boat at a village on the western side of the river at Alligator Creek.

Police questioned the men, searched the vessel and found a rusty tin under the front deck of the boat containing two fish bombs consisting of bottles of powder and wicks.

Both men were taken into custody to Honiara Central Police Station and Maritime police have seized the banana boat and outboard motor used by the offenders.

Inspector Balaga said the arrests reflected serious concerns by authorities about Solomon Islanders collecting and tampering with unexploded World War II ordnance, as well as the practice of using explosives to harvest seafood.

He said RSIPF representatives met with other government agencies including the Ministry of Fisheries, Honiara City Health Division and the Ministry of Environment yesterday to discuss a joint approach to these fish-bombing offences.

"The RSIPF is developing guidelines for all Government Officers including Police on how to deal with offenders found with explosives and or fishing or dealing in fish caught with explosives," he said.

"Under the Fisheries Act we can stop and search any boat suspected to have been dynamite fishing and prosecute the fisherman for any explosive found on the boat.

"In this situation, the onus is on the defendant to prove they had the explosive for some lawful purpose," Mr Balaga said.

Other powers for Government Officers and Police include: seizing the catch; seizing the boat and motor; arresting the occupants; arresting people found in possession of fish harvested by explosive and arresting anyone selling fish that has been illegally harvested.

"Besides the obvious dangers of collecting and handling World War II ordnance, and illegally dealing in explosives, there are other bigger issues as stake," Mr Balaga said.

"At our recent meeting, the Honiara City Health Division raised the health risks that arise with the consumption of fish harvested using explosives.

"The Ministry of Environment is particularly concerned about the damage caused to reefs when explosives are used to catch fish, as well as the pressure this places on the fish population," he said.

"The Ministry of Environment also has the ability to prosecute people who are found to have damaged the environment from using explosives."

Mr Balaga said over fishing in the Solomon Islands and damage to areas where fish live and breed were major concerns raised by the Ministry of Fisheries.

"Together these agencies and RSIPF are working on how we can best assist each other in reducing the incidence of illegal possession and use of explosives. The RSIPF is acting quickly and decisively to reduce this serious problem in our community," he said.