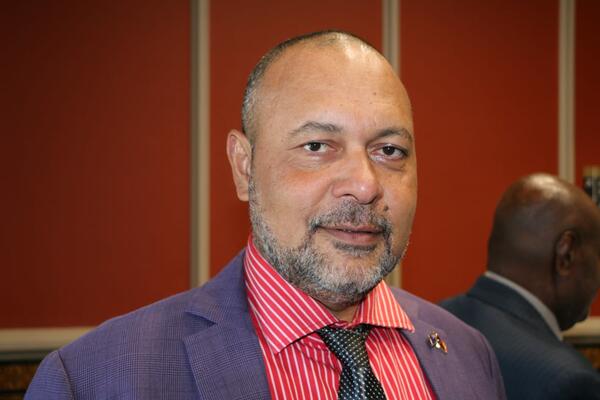 Sam Basil, born November 16, 1969, was a Papua New Guinean politician. He was a member of the National Parliament of Papua New Guinea from 2007, representing the electorate of Bulolo Open, until his untimely death.
Source: RNZ/Johnny Blades
Share
Thursday, 12 May 2022 10:42 AM

Police transported Basil to Bulolo Hospital but he was pronounced dead at 11.30pm local time.

Three other people were also injured in the crash and taken to hospital.

Police Commissioner Manning expressed his condolences to Sam Basil's family and the people of Bulolo electorate.

He appealed for calm to allow police investigations to be completed.

Manning said a second vehicle was involved, and the driver has been identified.

"It is with great sadness that I wish to regrettably inform the Prime Minister, and the country of the death of our Deputy Prime Minister following severe injuries he sustained in a vehicle accident. I wish to also express my condolences to the late Mr Basil MP's immediate family and the people of Bulolo electorate," he said.

"I also wish to express my gratitude to the many people and organisations that responded to the incident.

"Police have commenced its investigations into the accident and have ascertained that a second vehicle was involved in the incident and the driver of this vehicle is known.

"I appeal to any eyewitnesses to the incident to come forward to assist investigators in their investigations.

"I would like to appeal for calm during this time and allow the course of the investigations to be completed in a timely manner," Manning said.

He was later appointed as Deputy Prime Minister and Minister for National Planning and Monitoring when Prime Minister James Marape announced his new Cabinet lineup in October 2020.