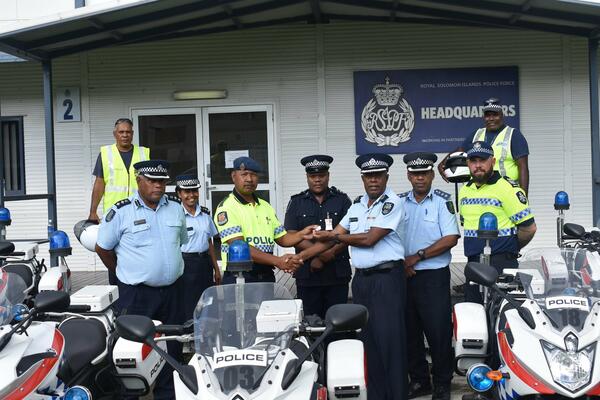 Constable Helai of the RPNGC hands over the keys of the gifted motorcycles to Acting DC Operation Joseph Manelugu.
Source: RSIPF
Share
Friday, 14 June 2019 08:21 AM

RSIPF Deputy Commissioner (DC) Acting for Operations Joseph Manelugu says, “On behalf of the Commissioner of RSIPF and the Executive I am very pleased to receive the five motorcycles from the Royal Papua New Guinea Constabulary and the offer to train a number of RSIPF officers in how to safely ride a motorcycle especially within a Motorcade.”

“The motorcycles will be used by the RSIPF Close Personal Protection (CPP) and the Traffic Department purposely to do escorts during ceremonial occasions involving dignitaries. The RSIPF would like to thank the RPNGC representative, Constable Lohia Helai and Australian Federal Police (AFP) Advisor Sergeant Clint Gordon for RPNGC’s support to the RSIPF and for gifting these motorcycles to us” says DC Manelugu.

The motorcycles were officially handed over by RPNGC Constable Helai on behalf of the PNG Police Commissioner Baki during his visit to the Solomon Islands to assess and select a group of RSIPF officers to undergo comprehensive motorbike training.

AFP Sergeant Clint Gordon who is an Advisor to the RPNGC explains: “In 2017, the Royal Papua New Guinea Constabulary along with the Australia Policing Partnership (APP) program commenced motorcycle training for the Constabulary in preparation for APEC 2018. The Motorcycle Training Package was derived from the Australian Federal Police Advanced Motorcycle Program and is a very challenging program.”

Sergeant Gordon adds: “The RPNGC, as part of the downsizing from APEC, have kindly gifted the Yamaha motorcycles to the Royal Solomon Islands Police Force. These motorcycles have primarily been used for Motorcade Escort duties. ”

“Twelve RSIPF officers will be selected to undergo the Motorcycle Program to enable them to conduct ceremonial duties for dignitaries that visit the Solomon Islands in the future. It is a four-week program designed to impart specific police riding skills and knowledge to undertake their motorcade duties. The course will be funded by the APP and will be delivered by RPNGC officers with the guidance of two qualified AFP instructors,” says AFP Sergeant Gordon.