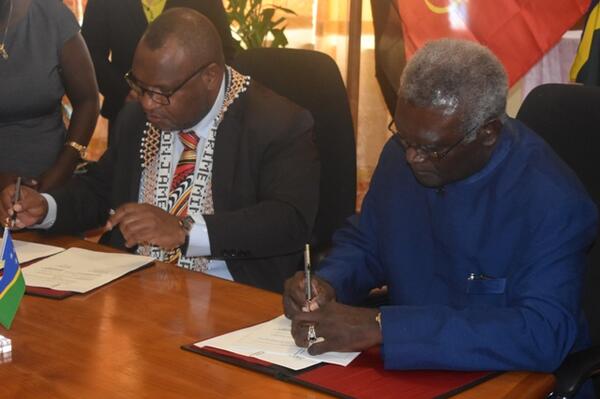 The documents are called ‘Framework agreement for Economic and Development Cooperation’ and ‘Treaty guiding relationship between Solomon Islands and PNG’.

Speaking to the local media, both Prime Ministers said this signing is to formalize and guide the relationship between Solomon Islands and PNG going forward.

Whether in forestry or fisheries sector, or other economic activities, these agreements will review the relationship both countries have.

He said the shared agreement will make sure none of the countries are at a disadvantage.

“I am excited we have reviewed the documents and we have updated versions of the document to guide our relationships going forward”.

Sogavare said they have agreed that this sort of visit will be made annually. He said meetings of this sort will not only be held in Honiara, but also to be held in Papua New Guinea.

“I acknowledge the Prime Minister’s vision and his view of how he wants to manage Papua New Guinea’s economy, a private sector driven kind of approach”, Sogavare said.

The PNG Prime Minster has led a delegation of both government and private sector officials to the Solomon Islands.

The delegation also had the chance to meet with members of the private sector in Honiara in a luncheon hosted by the Solomon Islands Chamber of Commerce and Industry (SICCI).