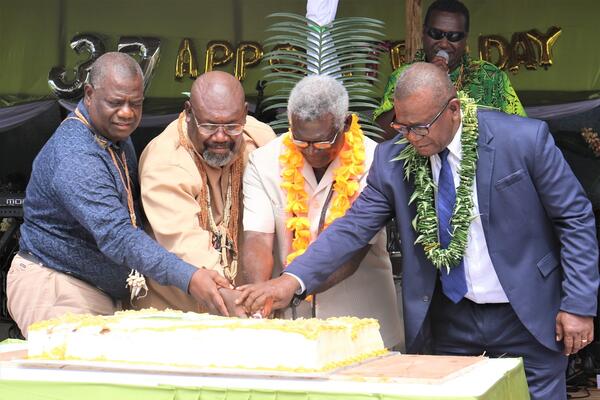 Speaking during the celebrations, the Prime Minister thanked the traditional owners of the land for inviting and accepting him and his delegation.

The Prime Minister said the theme “Inclusiveness and Sustainability: Harnessing Opportunities through Township, Culture and Tourism Development”, reflects the importance of working together.

The Prime Minister said he is encouraged to note that the Guadalcanal provincial government have continued to strive to achieve its visions.

Prime Minister Sogavare also joined the premier in calling on every individual, companies/businesses, investors, organisations, government ministries, institutions and Churches to respect the people of Guadalcanal and pay to the Province all their property rates, land rental fees and other legal fees, due to the province.

The Prime Minister also acknowledged all the issues raised by the premier and encouraged closer collaboration between the Guadalcanal province and the Government to address the issues raised.

“My door is always open for us to discuss ways to move our country forward together,” he said.

Prime Minister Sogavare also reiterated what he stated in Visale last year that Solomon Islands cannot move forward as a country or province if the national government and provinces work in isolation from each other.

“Together we can move mountains,” he said.

“Hon. Premier, allow me to once again wish you and the people of Guadalcanal Province a happy 37th 2nd Appointed Day Anniversary. May God Bless Guadalcanal and May God Bless Solomon Islands from shore to shore,” Prime Minister Sogavare said.