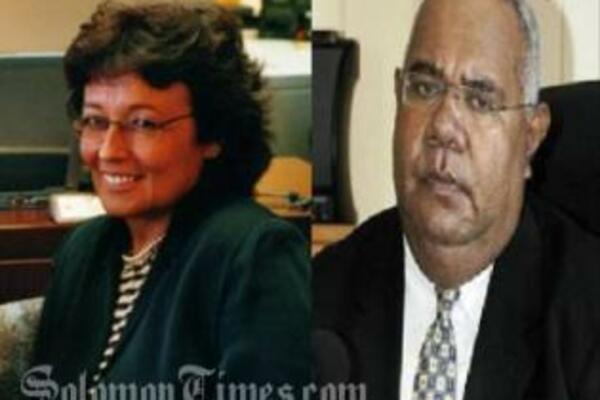 Prime Minister Dr Derek Sikua has announced a five-member Truth and Reconciliation Commission to probe the root causes of the recent ethnic unrests between 1998 and 2003.

Among the three men are two women - a local from Western Province and an overseas human rights activist from Peru in South America.

The National Commissioners are:

Reverend Sam Ata from Malaita Province and currently the Dean of the Saint Barnabas Cathedral in Honiara. An under graduate in theology from Saint John College, Auckland, New Zealand; a Masters Degree from the Pacific Theological College in Fiji and a Doctoral Degree from the Melbourne College of Divinity a faculty of Melbourne Victoria University in Australia.

Mr. George Kejoa who comes from Guadalcanal; an Economics graduate from the University of Papua New Guinea, a former senior public servant and a former parliamentarian for twelve years who previously held the posts of Minister of Finance and Minister for Economic Planning. Mr. Kejoa is currently serving in many different institutions within the Church of Melanesia.

The two non-national commissioners are Ratu Joni Madraiwiwi from Fiji a lawyer by profession and a distinguished member of the Fijian society. A 'member of the Bose Vakaturanga' (Great Council of Chiefs) in Fiji and former Deputy President of Fiji until removed by the military in December 2006.

The second non-national commissioner is Ms Sofia Macher from the country of Peru in South America a Human Rights Activist in her country who has also had wide experience in Truth and Reconciliation Commission processes having being involved in many internationally recognized commissions.

The Chairman of the National Selection Committee, the Hon. Chief Justice Sir Albert Palmer had submitted the names of the five individuals to the Prime Minister on Wednesday the 22nd of April in accordance with the TRC Act, 2008.

Hon. Chief Justice Sir Albert Palmer said the committee was satisfied there were many very qualified, experienced, skilled and talented people which make the selection a challenging and interesting process.

The National Selection Committee has also recommended Reverend Sam Ata to be the Chairman of the Truth and Reconciliation Commission and Ms Sofia Macher as Deputy Chairperson.

The five members of the commission are required by the Truth and Reconciliation Act, 2008 to start work within fourteen days of appointment and the TRC Office is now working to have the commissioners come on board.

Dr Sikua thanked the members of the National Selection Committee particularly the Hon. Chief Justice Sir Albert Palmer for their hard work in fulfilling the requirements of the Act within a limited time frame.

"I also wish to thank our people for their participation and in thanking them, I wish to call on our people to help the Truth and Reconciliation Commission because without the Truth there can be no true reconciliation and thus no lasting national peace, unity and healing".