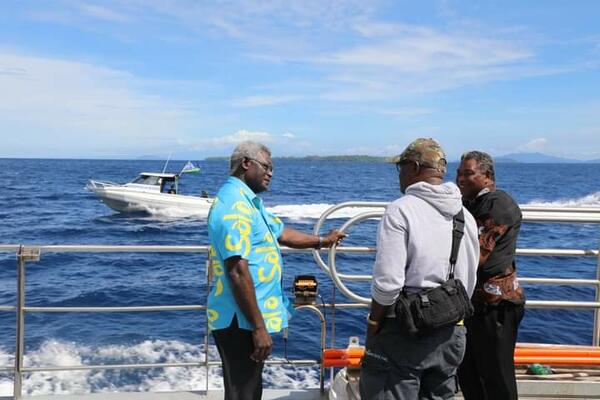 The Prime Minister said to protect our sea borders, in particular Choiseul, Shortland’s and Western provinces, Lord Howe and Temotu in the East, the National Government has also declared these provinces as emergency zones since 10th February 2020.
Source: Supplied
Share
Monday, 01 March 2021 12:54 PM

Prime Minister Manasseh Sogavare says the priority of the National Government’s redirection policy is to protect citizens from Covid-19.

Prime Minister Manasseh Sogavare highlighted this when he delivered his speech at the Choiseul province 2nd appointed day recently.

The Prime Minister said back then, the National Government took a proactive approach to curb the virus and immediately closed our air borders.

“We were among some of the first countries in the world to act, and since then the strategy has been successful in protecting our people,” he said.

Prime Minister Sogavare said since then, the Government with the support of the development partners have also upgraded the Central Hospital and molecular laboratory.

The Prime Minister said as a result, the Government’s has also established Covid 19 in country testing, the first of its kind for Solomon Islands.

“The Government is also currently in talks with the Covax facility in Europe, and has secured for phrase one 50 % population coverage of Corona vaccine. The Government plans to vaccine 100 % by the end of year,” he said.

The Prime Minister said to protect our sea borders, in particular Choiseul, Shortland’s and Western provinces, Lord Howe and Temotu in the East, the National Government has also declared these provinces as emergency zones since 10th February 2020.

The Prime Minister said this has enabled the Government to strengthen surveillance and monitoring in these locations.

“The priority of the Government’s redirection policy is to protect its citizens from the virus and to keep our economy afloat,” he said.