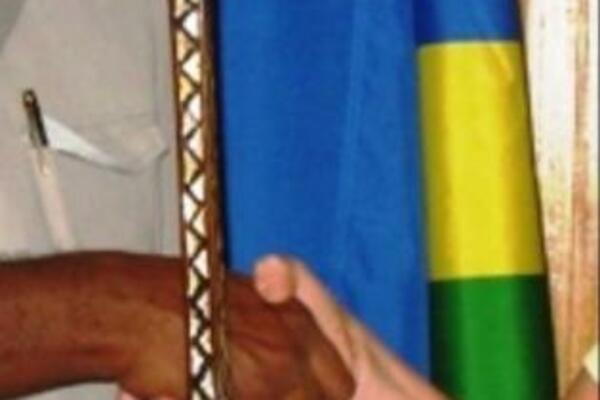 Dr Sikua said that the carved candle holder would be "best kept in the Museum where the public will truly appreciate its historical value and its war-time history."
Source: Photo Supplied
Share
Thursday, 25 June 2009 07:00 AM

Prime Minister Dr Derek Sikua yesterday offered as gift to the National Museum the carved wooden candle holder found by a retired US serviceman some 67 years ago.

While handing over the artifact, Dr Sikua told the National Museum Director Mr Lawrence Foanaota that the carved candle holder would be "best kept in the Museum where the public will truly appreciate its historical value and its war-time history."

Mr Foanaota conveyed his greatest appreciation to Dr Sikua for his foresight to give the artifact to the National Museum.

"Sometimes some of our leaders do not see such returned artifacts as important to our national heritage and would rather keep the artifacts themselves."

"But (the Prime Minister's) decision to return the artifact to the National Museum would ensure that our future generations will also value the importance of this artifact. It is also a chance to share with the public this valuable piece of history so that they can also appreciate its historical significance" said Mr Foanaota.

Mr Foanaota said the information associated with the wooden candle holder and the history of its journey since it was found more than 60 years ago makes the artifact as an "object of national heritage".

"It is only proper that all Solomon Islanders should also have the chance to share and own this object of great historical value", said Mr Foanaota.

Mr Foanaota said the artifact will be catalogued as a gift to the National Museum by the Prime Minister to be included in the national collection and exhibited to the public.

Dr Eileen came to Solomon Islands in 2008 as a worker under the Loloma Foundation program.

She went back to the US and wrote about a Solomon Islands war veteran story which was published in one daily magazine there.

Upon reading the story, Mr Don Chalmer immediately contacted her through email seeking advice on how he could return the artifact to Solomon Islands.