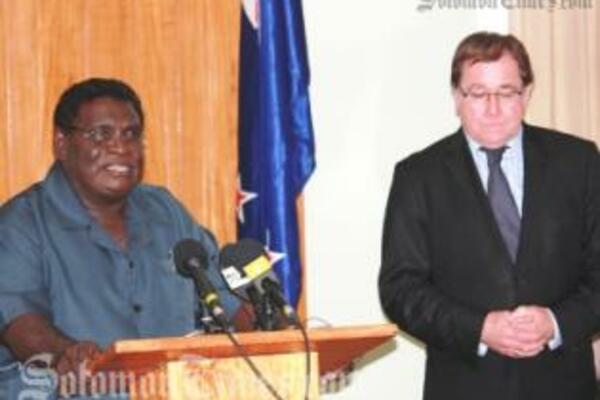 Prime Minister Philip acknowledged the visit - describing it as a symbol of close relations between our two countries and peoples.
Source: Photo Supplied
Share
Tuesday, 31 August 2010 10:10 AM

At the meeting, Hon McCully congratulated Prime Minister Philip for his election victory as the two leaders discussed issues of common interest between the two countries.

Prime Minister Philip acknowledged the visit - describing it as a symbol of close relations between our two countries and peoples, as well as New Zealand's proactive engagement with countries in the region, including Solomon Islands.

New Zealand has contributed towards the development of Solomon Islands in various sectors including education; fisheries; RAMSI; and through the New Zealand Recognised Seasonal Employment Scheme which has enabled Solomon Islanders to work in the horticulture sector in New Zealand.

"I understand that the Scheme has been a success so far and I hope that we could also explore the possibility for the scheme to include other sectors as well apart from horticulture," Prime Minister Philip said.

He also acknowledged that the NZAid program in Solomon Islands is the biggest in the region and assured Hon McCully that the Solomon Islands Government will continue to work closely with the NZ Government to ensure "the success of our bilateral cooperation in the various sectors".

On RAMSI, Prime Minister Philip acknowledged New Zealand's contribution to the mission and noted that the "Solomon's government would like to explore if RAMSI could do a bit more to assist our development endeavors".

"Above all, I wish to assure you that my Government values its relations with New Zealand and will work closely with you to further enhance our bilateral cooperation, as well as address the challenges facing our countries, including that of climate change and sea level rise," Prime Minister said.

Mr McCully's delegation also had the opportunity to meet the Solomon's new cabinet ministers' on Monday.