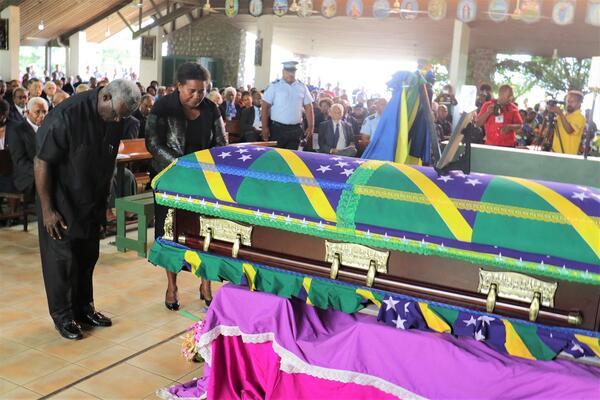 The Prime Minister and his wife Madam Sogavare paid their final respects as the body of the late Sir Paul Tovua Lay-in-State at the National Parliament Chambers.

The Prime Minister, in his condolence message, conveyed on behalf of the Democratic Coalition Government for Advancement (DCGA) and the people of Solomon Islands, his deepest sympathy and heartfelt condolences to the wife, children and members of the immediate family, relatives, friends, and colleagues on the passing of the late Sir Paul Tovua.

The Prime Minister said the late Sir Paul Tovua was one of the founding fathers of our nation, and a proud Solomon Islander.

“My government honour his legacy and mourn his loss alongside his family, friends, colleagues and all the people of Solomon Islands. Let us all remember the contributions of this great man to our nation,” he said.

He was re-elected into the National Parliament in October 1984 and served until February 1989.

In 1994, he was elected Speaker to the National Parliament of Solomon Islands. He held this role until 2001.

The late Sir Paul Tovua held various ministerial portfolios during his time as a Member of Parliament.

Before entering the Parliament scene, the Late Sir Tovua was the first-ever Land Valuer in Solomon Islands.

The late Sir Paul Tovua also served as the first Chairman to the Political Parties Commission and remained a member until his passing.