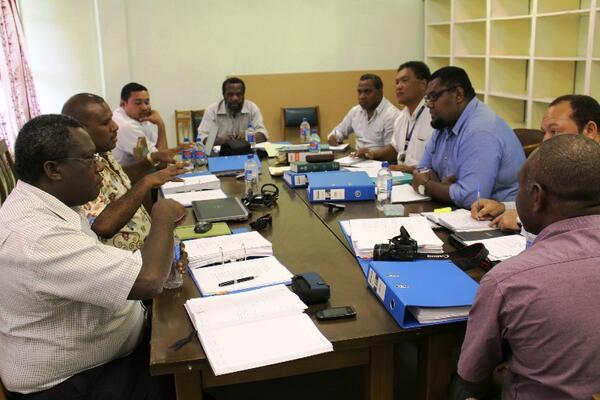 The PNG Team is here to help the Solomon Islands Government set up the Registry of Political Parties for Solomon Islands. The Team is fully funded by the Government of Papua New Guinea.
Source: Photo supplied
Share
Thursday, 24 April 2014 09:45 AM

Prime Minister Gordon Darcy Lilo last night welcomed and commissioned the work of a PNG Team from the Political Parties Registry to the Solomon Islands.

In his welcoming remarks last night the Honorable Prime Minister confirmed that the process of establishing the Registry of Political Parties is well underway and it will run in parallel to the progress in the passage of the Political Parties Integrity Bill in Parliament.

Also in attendance last night were the New Zealand High Commissioner and the Head of the EU Delegation in Solomon Islands.

These are other development partners who will, in addition to PNG, be assisting to set up the Registry of Political Parties and to assist develop the regulations and integrity standards of the proposed law.

Dr. Gelu and his team will be here from 22 April to 3 May to work with local counterparts for 2 weeks. Their work with the OPMC has already commenced today.