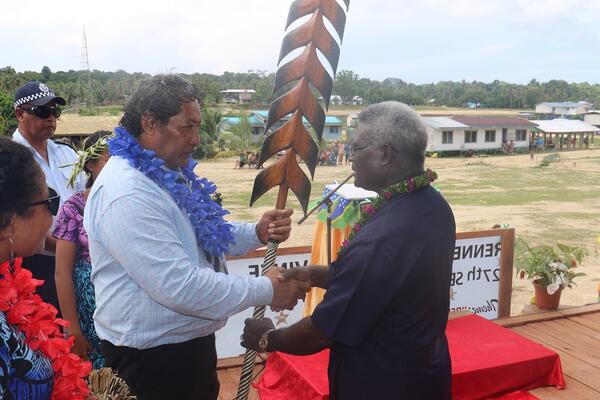 Prime Minister Manasseh Sogavare was the guest of honour at the Rennell/Bellona Second Appointed Day celebrations at the Provincial Capital, Tingoa, held yesterday.

Delivering the keynote address outside the Tingoa Provincial station, Prime Minister Sogavare said this year’s theme “Redirecting Rennell and Bellona Province to Reforms and Good Governance” reflects on the pillars of the country’s National Development Strategy 2016 to 2035 and especially the DCGA’s policy translation and Implementation document.

Prime Minister Sogavare said he is very pleased to note that the Provincial Government Reform Agenda has progressed with special emphasis on Good Governance.

“You can never go wrong. Good Governance is a very important pillar of the democratic system of Government we adopted since independence”, he said.

The Prime Minister says that terms of contributions to the national economy, Rennell and Bellona Province hosts the only operational mine in the country now, which contribute immensely to the country’s foreign reserves earning, placing the province’s earning per capita to above the average of other provinces.

“I must take this opportunity to thank your province for this great contribution of SBD$121,500,494 over the last 6 years,” he stressed.

The Prime Minister said there are challenges in the way certain things are done which tested the patience, goodwill and honesty of our people.

However, he said these are challenges faced together within our legal system.

“That aside, a question that any right minded people of this province is fully entitled to ask is, what the National Government is putting back into this province in terms of social and economic development,” he said.

Prime Minister Sogavare assured the premier of Renell Bellona and her people that despite budget cuts in most of the Government Ministries, because of the COVID 19 pandemic, funding for Provincial Governments through Fixed Service Grants and salary payments has continued as normal.

He said services the Provincial Government is mandated to do will not be disrupted.
The Prime Minister said the 2020 Provincial Capacity Development Fund (PCDF) is $25 million for all nine provinces.

“I hope Rennell/ Bellona Province utilizes this funding for its small infrastructure development programs,” he said.

Prime Minister Sogavare, Madam Sogavare and his Cabinet Ministers and MPs that attended the celebrations returned to Honiara yesterday.