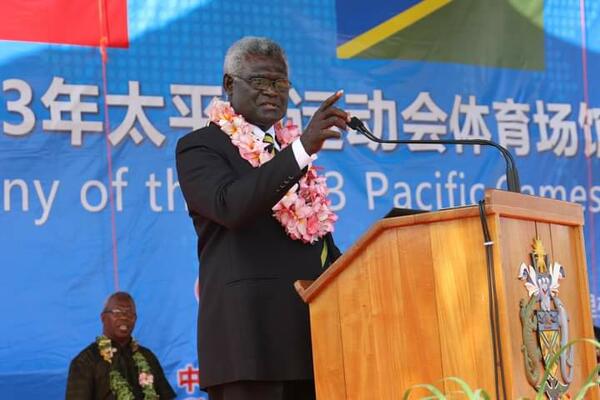 The Prime Minister said the sporting facilities will comprise a strategic investment that will unify Solomon Islands as a nation.
Source: Supplied
Share
Wednesday, 05 May 2021 15:52 PM

It is yet another significant milestone as Prime Minister Manasseh Sogavare graced the ground-breaking ceremony of the 2023 Pacific Games Stadiums project in Honiara today.

Speaking during the occasion, the Prime Minister said Wednesday 5th May 2021 marks another significant milestone for the country in its journey towards the 2023 Pacific Games.

He said the 2023 Pacific Games Stadiums project is only one of five major development projects the government of the Peoples Republic of China had agreed to support Solomon Islands on, since the establishment of the two countries diplomatic relations.

Prime Minister Sogavare said when the facilities are completed; Solomon Islands will boast one of the finest sporting and community facilities in the Pacific.

“For this wonderful gift to the people of Solomon Islands, I convey my sincere gratitude to the President, the government, and people of the People’s Republic of China,” he said.

The Prime Minister said the sporting facilities will comprise a strategic investment that will unify Solomon Islands as a nation.

“To all our sports people in the country, to all our youths, and to all the sports federations represented here this morning, these facilities belong to you – to use and enjoy, to build and harness your skills, to develop your talents in-order to be the best sports people you can be,” he said.

Prime Minister Sogavare said the facilities will focus our energy as a nation to provide sustainable venues to be used for grass root sports, high performance sports, and community events for the next several decades.

The Prime Minister in his speech also recalled, almost five years ago, in 2016, when he led a bipartisan team of political leaders to Vanuatu to compete with other Pacific nations for the right to host the 2023 Pacific Games.

“At that occasion, we won the Right to host the 2023 Pacific Games’. Hon. Jerry Manele, then the Leader of Opposition joined hands with the government to bring the games to our shores – as first-time hosts of this Pacific sporting extravaganza,” he said.

The Prime Minister recalled at that time everyone was elated and were all in Cloud 9.

However, he said shortly after the victory had sunk in, he started having serious doubts as to whether they had done the right thing.

“Whether we would be able to live up to the promise we made to the region that we, Solomon Islands, can successfully host the 2023 Pacific Games,” the Prime Minister said.

Prime Minister Sogavare said reflecting back to that fateful day, five years on, and exactly 803 days from the start of the 2023 Pacific Games, he thanked the Almighty because;

i. He had a plan for our nation to succeed in hosting the games and
ii. the 2023 Pacific Games had become the unifying force to strengthen and build our nation at this time of great challenge and tribulations – globally, regionally, and nationally as a result of the global Covid-19 pandemic.
The 2023 Pacific Games Stadiums will include seven separate sporting infrastructures.
The seven infrastructures include:
i. A 10,000-seat national stadium which includes 1,000 VIP seats,
ii. An Aquatic centre hosting a 50-meter competition pool, and a 25-meter training pool,
iii. A six-court tennis centre
iv. A full-sized training track and field with a full-sized soccer/ rugby field
v. A 90 meters by 50 meters multi-purpose hall
vi. A 5-aside competition hockey field
vii. A double story food court and office space building for the Games Organising Committee

The Prime Minister said the project is one of the largest infrastructure projects, funded and built by the People’s Republic of China in any of PRC’s partner Pacific Island countries.