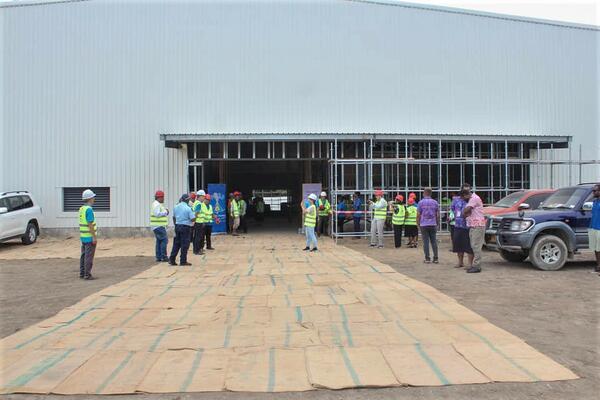 Prime Minister Sogavare said despite the impacts of the pandemic, work has progressed.
Source: File: Facebook
Share
Friday, 23 April 2021 08:34 AM

Prime Minister Manasseh Sogavare says a lot of progress has been made in the planning and construction of the 2023 Pacific Games facilities despite the impacts of COVID-19.

The Prime Minister stated this in Parliament when responding to a question by the MP for Small Malaita Rick Hou.

Prime Minister Sogavare said despite the impacts of the pandemic, work has progressed.

Here are the following updates the Prime Minister presented in Parliament.

1. The Solomon Islands National Institute of Sports [SINIS] – this fully SIG funded centre for sports excellence is on scheduled to be completed by June 2021.
The Prime Minister said this facility holds the key to our bid for no less than 40 Gold medals in 2023.

2. Multi-purpose Futsal Stadium – This facility is funded and built by the government of Indonesia. Its covers an area of 90 metres by 50 meters. It will host three full-size futsal courts and can accommodate all other indoor sports. The construction is expected to be completed by May 2022.

The Prime Minister said for the first time our Futsal team will finally have a permanent home where they can train and do their trade in.

3. The PRC funded Stadiums Project – The main stadiums project funded by the government of the Peoples Republic of China had been awarded to CCECC to construct. It comprises 7 discrete infrastructure projects as follows:

Prime Minister Sogavare said the construction period for all the7 projects mentioned above is 24 months commencing 1st May 2021 to 31st May 2023.

4. The SIFF 2023 Football Academy – This Academy which will be located at the former MAL farm at KGVI has been tendered. A selection will be completed shortly, and the successful contractor will commence the construction. This project is funded by the government of Papua New Guinea to be co-financed by another partner. This project comprises 2 full-sized soccer fields, one outdoor futsal court, one beach soccer court, a new office, administration building and a 50-bed dormitory facility.

The Prime Minister said when completed, it will be the best in Football Academy in the region.

5. New Games Village - The NHA is working with the PRC Embassy to design and construct a small ‘Games Village’ at the SINU Kukum Campus that would accommodate up to 600 athletes during the games.

“An Exchange of Notes has been signed between our two governments on this project and the assessment team will arrive in May to conduct the assessment of the project,” the Prime Minister told Parliament.

Prime Minister Sogavare said this is another legacy project by the National Hosting Authority. He said PG2023 will use the facility for the duration of the Games after which ownership will be handed over to SINU.

6. Water Sports Venue unfunded - The only major facility that is currently outstanding is Water Sports. The location for water sport is at the DC Park just beside the airport. The NHA is discussing financing with partners.

The Prime Minister said the Government is confident we will secure the funding needed for this facility.

7. Existing Facilities – The NHA has secured several existing venues for some sporting events, including the HCC Multipurpose hall that is currently used as a field hospital and the Maranatha hall, and Lawson Tama.

Prime Minister Sogavare said the Government plans to include ablution blocks to each of the four facilities for use by spectators when the fields are ready to be used.