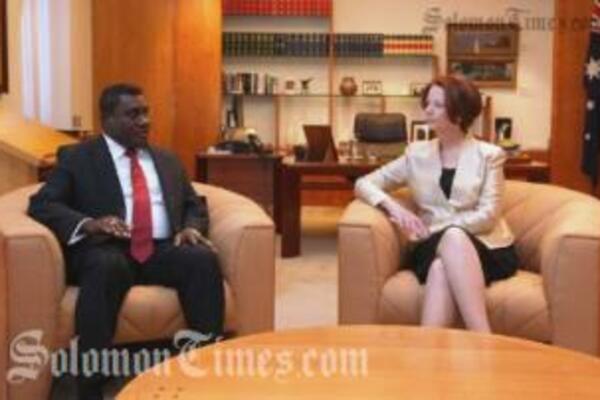 Prime Minister Julia Gillard has welcomed her counterpart from the Solomon Islands at an official Parliament House ceremony.

Opposition Leader Tony Abbott and Mr Lilo's wife were also present for the occasion, which included a flag-raising ceremony and booming multi-gun salute.

Mr Lilo then signed the register outside the prime minister's office, before the two leaders headed in for bilateral discussions.

Talks are expected to focus on regional security and the Australian-led Regional Assistance Mission to Solomon Islands (RAMSI), which has been helping maintain law and order in the Pacific nation since 2003.

On Tuesday, Mr Lilo met with Defence Minister Stephen Smith, who said Australia was planning on withdrawing RAMSI's military component in the second half of 2013 as security improves in the Solomon Islands.