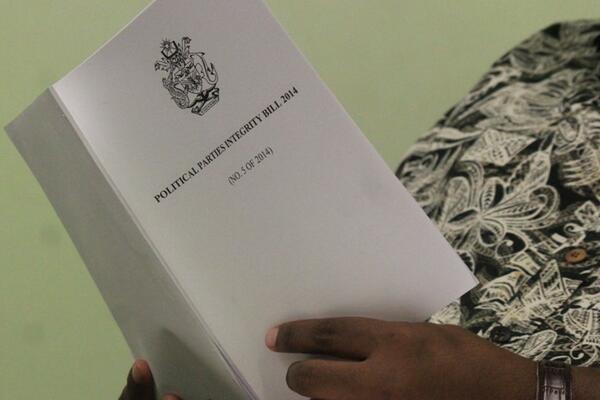 The Bill was approved by Cabinet more than three weeks ago and was submitted to the Clerk to Parliament shortly after its approval.
Source: Photo supplied
Share
Wednesday, 02 April 2014 08:47 AM

Prime Minister Gordon Darcy Lilo is confident that Parliament will deliberate on and eventually pass the Political Parties Integrity Bill (PPIB) which is now before the Parliamentary Bills and Legislation Committee.

Parliament has indicated that the Bills and Legislation Committee will probably invite submissions from the public, which means the hearings are likely to be held any time in the week.

The Bill was approved by Cabinet more than three weeks ago and was submitted to the Clerk to Parliament shortly after its approval.

Director of the Governance Program in the Office of the Prime Minister and Cabinet Calvin Ziru today explained that the Bill is the same Bill that was withdrawn by Parliament in 2010 but the current version includes relevant amendments which substantively alter and clarify aspects of the Bill which were previously deemed contentious.

“We have made substantive amendments which include the establishment of the Political Parties Commission, which would be the statutory body responsible for administering the proposed Act,” Mr Ziru said.

Previously, it was suggested that the Electoral Commission administer the Act, and this required amendments to the Constitution which was proved difficult to secure support towards the original intention.

“The Bill provides the legal framework for the incorporation, registration and administration of political parties, as key political actors within Solomon Islands, which if allowed to develop internally and organizationally will enhance the role of political parties in local politics. This is what is meant when we claim to promote political integrity through this Bill,” Mr Ziru added.

As the leading Ministry in initiating the Bill, the Office of the Prime Minister and Cabinet is confident in its current version and believes that Members of Parliament will appreciate the rationale, logic and the importance of the Bill.

“We still have to appear before the Bills and Legislation Committee and in that hearing, we expect our assumptions on the Bill to be critically examined but that’s important if our interest is about bringing the Bill to a place where the legislators can say ‘yes. I believe in the significance of this law,” said Mr Ziru.