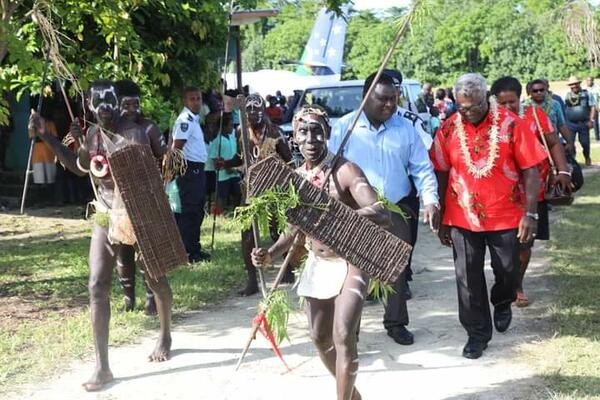 Hundreds of Taro residents including school children were also at the airport to welcome Prime Minister Sogavare and his delegation.
Source: Supplied
Share
Tuesday, 23 February 2021 13:24 PM

Prime Minister Manasseh Sogavare has arrived in Taro today to a rousing welcome ahead of the 2nd appointed day celebrations, Thursday this week.

The Prime Minister was accorded a traditional warriors welcome and was met upon arrival by the Choiseul premier and his executive.

Hundreds of Taro residents including school children were also at the airport to welcome Prime Minister Sogavare and his delegation.

As part of the program, the Prime Minister will also visit Taro Hospital this afternoon Tuesday 23rd February.

The Prime Minister will also host a dinner for the premier and his executive, government agencies and stakeholders in Taro this evening.

Tomorrow, Wednesday 24th, the Prime Minister will travel to Nila in the Shortland Islands where he is expected to meet with chiefs and the front liners at the border.

The Prime Minister will then return to Taro where he will be the guest of honor at the province’s 37th Second Appointed Day on Thursday 25th.

Prime Minister Sogavare and his delegation will return to Honiara on Friday 26th.