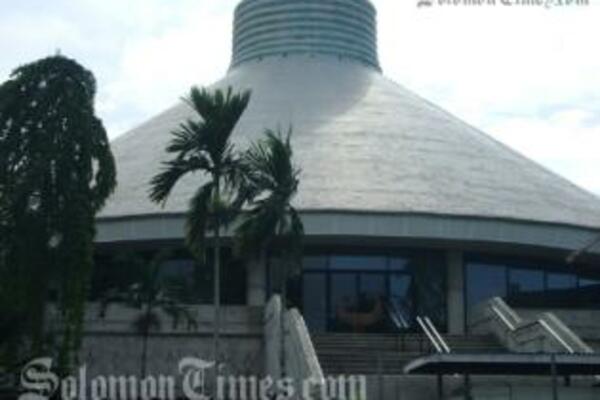 The Political Integrity Bill aims to achieve political stability, integrity and Development of Parties, and stop Parliamentarians crossing the floor at their own will.
Source: STO Archives
Share
Monday, 13 July 2009 07:00 AM

A group of Government Ministers are reportedly planning to defeat the Government's Political Integrity Bill.

The Bill has been one of the key policy initiatives of the current CNURA Government led by the Prime Minister Dr. Derek Sikua when it took office at the end of 2007.

Several MPs have revealed to the National Express Newspaper that a number of Government Ministers were secretly campaigning to defeat the Bill scheduled to be debated in Parliament soon. Reasons to their move are not immediately known.

A senior member of the current CNURA Government has told the National Express that he is extremely surprised that some CNURA Government Ministers are secretly campaigning to defeat the Political Integrity Bill if it is tabled in Parliament.

The senior Government Minister told the National Express that the "stupid move" will make the Government look "really ridiculous" and hopes the Ministers involved will re-think what they are doing and support the initiative for the sake of the country.

None of the MPs who spoke to the National Express could provide any explanation as to why the Ministers are planning to undermine their own Government by working
against one of the CNURA Government key policies.

The National Express has however learnt that some government MPs have been quite uncomfortable about the proposed Bill for some time, but had not really come out and express their reservations openly.

It is believed that the group of anti-integrity bill ministers also has support amongst some MPs in the Opposition and also some powerful allies outside Parliament.

"All in all, it is all about protecting the status quo which has been a big money earner for many MPs over the years and they are not going to give that up easily," one Government insider told the National Express.

He also told the National Express that it is public knowledge that individual businessmen with the money had been using the country's weak political system to buy off politicians in order to control Solomon Islands.

The political integrity bill has been the result of the work of a taskforce set up by the Government, headed by the Special Secretary to the Prime Minister John Keniapisia.

Mr. Keniapisia and his taskforce had made two visits to PNG where they already had a Political integrity Act offering a model which Solomon Islands could adopt.

The taskforce also organized a range of workshops that had involved political leaders of the region from past to present, including the country's first Prime Minister Sir Peter Kenilorea and the first President of the Republic of Kiribati Ieremia Tabai and many scholars from the region.

The main idea behind the CNURA Government's political integrity bill is to introduce some ways of controlling the relative ease at which MPs walk across the floor of Parliament causing political instability.

The control measures proposed in the integrity bill include regulating political parties and imposing some control on candidates contesting during national general elections.