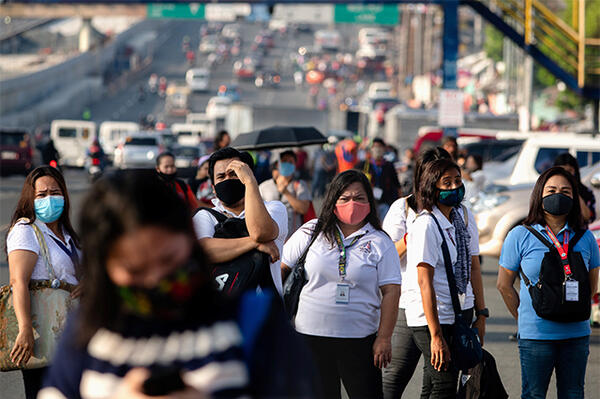 The Department of Health (DOH) of the Philippines on Sunday reported 2,076 new confirmed cases of COVID-19 infection, bringing the total number in the country to 429,864. The Philippines has a population of about 110 million.
Source: Xinhua.net
By Georgina Kekea
Share
Monday, 30 November 2020 08:21 AM

The next flight from Manila, Philippines, is expected to arrive in Honiara on the 9th of December 2020. Secretary to Prime Minister, Dr. Jimmie Rodgers revealed this in the Oversight’s weekly talkback show.

Rodgers says the flight was rescheduled following six positive cases of COVID-19 amongst Solomon Islanders in Manila and an additional one confirmed case at the hotel which they are staying.

“So, the hotel which the students are staying, we are watching them very carefully, we are testing them, before they come, so the next flight for Manila is scheduled for the 9th of December’, Rodgers says.

He says it is very costly for the government to keep the students, but as a precaution it was important that their stay in the Philippines was extended. The students are all being kept in four different hotels in Manila.

It is costing the government SBD$2 million dollars a month to keep the students in the respective hotels.

Rodgers says plans to being all of them home remains, the last flight from the Philippines will possibly take place in January 2021.

“Because the students from Philippines will be staying in the same quarantine centers in Honiara, so until the group that arrives on the 9th leave the centers, we cannot bring them back”, Rodgers says.

It was reported that the students in Philippines were quite upset that they were not able to be brought home as per initial arrangement. Others are upset that they were accused of breaching quarantine requirements, resulting in the positive cases. They claim that workers at the hotel have not been observing safety measures and should also be tested regularly.

Meanwhile, the Department of Health (DOH) of the Philippines on Sunday reported 2,076 new confirmed cases of COVID-19 infection, bringing the total number in the country to 429,864.

The DOH said 10,579 more patients recovered, raising the total number of recoveries to 398,624. The death toll climbed to 8,373 after 40 more patients died from the viral disease, the DOH added.