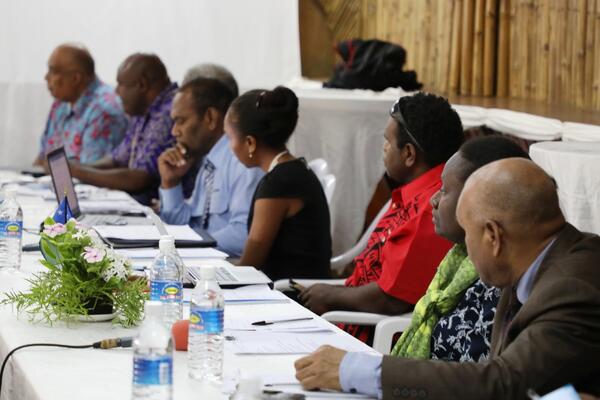 The meeting which is currently underway at Gizo Hotel followed on from the 7th JBC held in Kokopo, East New Britain Province of Papua New Guinea in 2016.
Source: Supplied
Share
Thursday, 29 August 2019 09:06 AM

The Permanent Secretary of the Ministry of Police, National Security and Correctional Services (MPNSCS), Ms. Karen Galokale has highlighted the value of the ongoing dialogue on border security management between Solomon Islands and Papua New Guinea this week.

She said the gathering in Gizo this week is not only a symbol of the two Governments’ mandate but a symbol of our desire to expand and express our two countries’ national interests in relation to border management.

“Our two neighboring countries share a lot in common in terms of cultural links, environment, religion and history and it is a privilege that our relationship is one that is not only cordial but one that is built on mutual respect, understanding and knowledge of the “wantok” values of Melanesian heritage,” Ms. Galokale said.

Officials from the two Government’s began separate preparatory meetings on Tuesday this week ahead of the formal joint reviews and discussions which began on Wednesday.

The Joint Border Committee (JBC) was established by leaders back in 1998 in Papua New Guinea which was aimed at ensuring effective implementation of jointly-approved basic border agreements between the two countries.

Ms. Galokale further highlighted that the management of the common border in relation to the existing agreements can only be discussed and addressed by our two countries alone and it is incumbent of officials to ensure that the meeting is successful with meaningful and achievable outcomes.

This week’s meeting which formally began on Wednesday will involve joint reviews and discussions on the outcome of the 7th JBC in Kokopo, PNG, which will include reports by the Joint Technical Working Group, Updates on Border developments, Updates on the status of Bilateral and Border Treaties and Arrangements between Solomon Islands and PNG.

These Border Treaties included the Basic Agreement on Border Arrangements between SI and PNG, The Treaty on Sovereignty, Maritime and Seabed boundaries, Agreement Concerning the Administration of Special Areas and the Review of the Memorandum of Understanding on Joint Border Surveillance and Administration.

The meeting will also include updates on the Bougainville Referendum, updates on National Reconciliation and other relevant issues regarding the SI-PNG border.

More than forty senior and technical officials from the two Governments are currently in Gizo for the JBC meeting. The Solomon Islands delegation consists of Officials from the Ministry of Foreign Affairs and External Trade (MFAET), the Ministry of Police, National Security and Correctional Services, the Office of the Prime Minister and Cabinet, the Maritime Department, Customs, Immigration, Biosecurity, the Culture Division and other support staff.