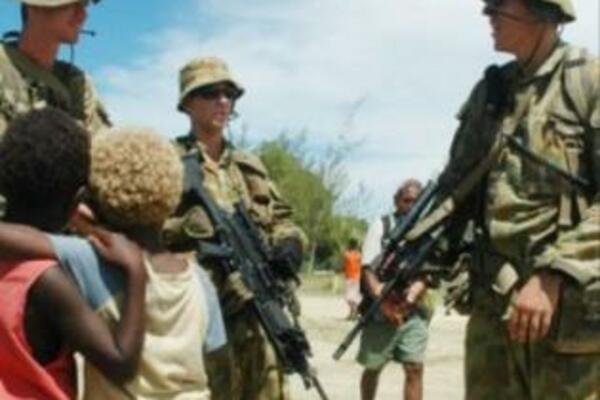 The Australian army with RAMSI in the early years, when the focus was peacekeeping.
Source: appvasthqld.webs.com
Share
Tuesday, 04 December 2012 08:42 AM

The Australian Government has recently shared its experiences and lessons on its peacekeeping missions in the East Timor and the Solomon Islands.

The Australian Parliamentary Secretary for Defence, Dr Mike Kelly, told ABC Radio Australia that he felt they had "learned the lesson of taking our eye off the ball."

"....in the Solomon Islands we focussed on the security sector, but took our eye off the ball in terms of the political situation," he said.

Dr Kelly spoke on the issue at the 8th International Lessons Learned Conference in Sydney, which aims to share experiences of peacekeeping operations and disaster responses between the 20 participating nations.

Its the first time the three-day meeting has been held in the southern hemisphere, and this years theme is 'transitions'.

"Of course, we in Australia - not only in the defence force, but the police and aid agencies - have had a lot of experience since the end of World War Two in situations of stabilisation and counter-insurgency and peace operations," Dr Kelly said.

"And particularly, of course, in our region, dealing with Timor, Bougainville, Solomon Islands and Vanuatu."

"We've learned a great deal about how important it is to ensure you understand the cultural context you're working in to ensure you're building local capacity and not developing dependencies."

The Lessons Learned Conference runs from December 3 to 6.