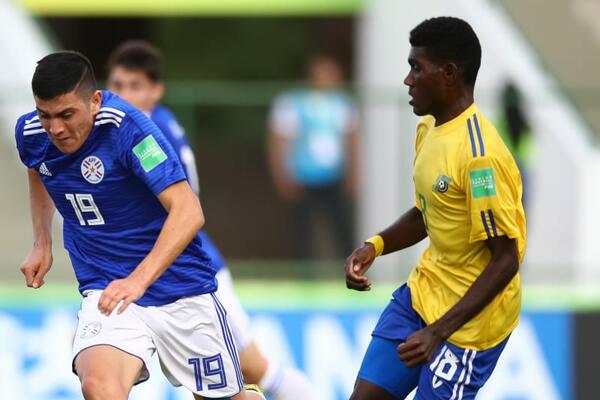 Zani Sale of Solomon Islands U-17 tussle for the ball with Fernando Presentado of Paraguay U-17.
Source: FIFA
Share
Friday, 01 November 2019 10:05 AM

Paraguay led just three minutes into their match against Solomon Islands this morning setting the tone for a 7-0 triumph at the FIFA U-17 World Cup Brazil 2019.

This performance from Paraguay made Monday's physical, goalless affair against Concacaf champions Mexico feel miles away.

Noguera's early chip over Solomon Islands goalkeeper Davidson Malam was a harbinger of their scoring spree, and the young lads from Paraguay wore out their competition with five goals in the final 25 minutes of the game.

The Oceania side rarely lacked for effort or bravery, but came up against a proven defence and attackers eager to open Paraguay's account at Brazil 2019.

Solomon Islands goal keeper Malam faced an insurmountable 28 shots, 13 of which hit the target. He twice used his feet to make impressive stops in one-on-one situations, once in each half. Solomon Islands remain in search of their first goal at a U-17 world finals.