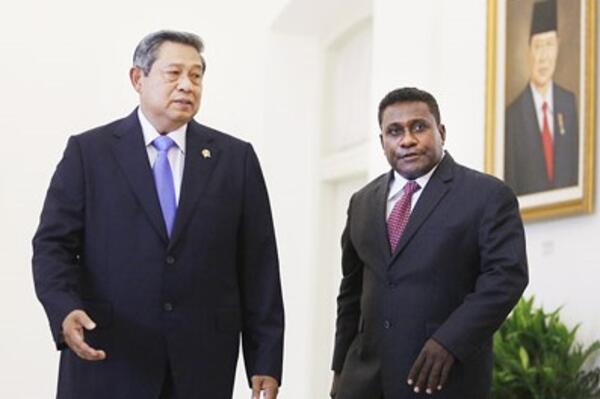 Lilo, who started his three-day visit on Monday, told journalists after the meeting that he was “quite impressed with the [ongoing] progress in Papua,” but did not elaborate further.

He recalled a visit to Papua by representatives from his country some months ago upon invitation from Indonesia to observe the situation there.

The Indonesian government had invited foreign ministers from Melanesian nations grouped under the Melanesian Spearhead Group (MSG) to Indonesia to receive briefings on development in Papua, a move that could be seen as a way to obtain international support for the country’s sovereignty over its easternmost region.

The MSG consists of the Solomon Islands, Fiji, Papua New Guinea and Vanuatu, as well as the Kanak and Socialist National Liberation Front (FLNKS), a pro-independence group from French-ruled New Caledonia.

Presidential spokesman for foreign affairs, Teuku Faizasyah, confirmed Lilo’s visit was not only to strengthen bilateral relations, but also reflected both country’s determination to respect the sovereignty of each country.

The Free West Papua movement, in this case the West Papua National Council for Liberation (WPNCL), is pushing for independence from Indonesia and sees membership of the MSG as a step toward international recognition.

“But clearly we see MSG members, in general, understand how serious we are in our efforts to solve various problems, including those in Papua,” Faizasyah said. “And they asserted on various occasions their recognition of the territorial integrity of the Republic of Indonesia.”

In mid June, MSG summit meeting deferred the membership bid by at least six months, saying it was important to engage with Indonesia. They agreed to establish a process of dialogue and consultation with Indonesia and welcomed the invitation for foreign ministerial mission to come to Indonesia, although they also concluded that the group fully supported the rights of the people of West Papua for self-determination.

Two-way trade between Indonesia and Solomon Islands was valued at US$15.88 million in 2012 with an average annual increase of 17.28 percent during the last five years. Indonesia recorded a $9.1 million trade surplus with the Solomon Islands in 2012.