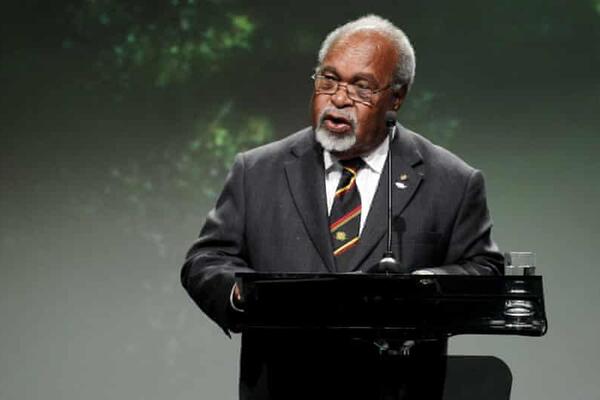 Prior to independence, Somare was the chief minister of the Australian-administered territory of Papua New Guinea. He most recently served as the country's leader briefly in 2011.
Source: The Gaurdian
Share
Friday, 26 February 2021 10:38 AM

Known as the "father of the nation", Somare led the Pacific archipelago to independence from Australia in 1975 and served four times as prime minister.

He had been diagnosed with pancreatic cancer in early February, his daughter, Betha Somare, said in a statement.

She said many Papua New Guineans had embraced her father as their own "father and grandfather".

Prior to independence, Somare was the chief minister of the Australian-administered territory of Papua New Guinea. He most recently served as the country's leader briefly in 2011.

PNG is a mountainous and sprawling nation rich in resources and minerals, including oil and gas and gold and copper.

Linguistically diverse, it is one of the largest island economies in the South Pacific, although it has faced economic hardship and internal conflict, most notably during the decade-long civil war in the region of Bougainville that claimed as many as 20,000 lives before ending in 1998.

PNG Prime Minister James Marape said the former leader was now rested from the "pain and toils of life".

"Our nation honors this great leader, the founding and longest serving prime minister of our country," Marape said in a statement, appealing for a week of silence, peace and calm as the country pays its respects.

"He is unmatched by anyone of us who comes after him," he added.

Australia's Prime Minister Scott Morrison said that Somare was the founding father of a democratic and independent PNG and "great friend" to Australia.